Well, this week was a challenge for me.  This is the first week I've been forced to juggle my real estate business and the blog.  Lucky for me, the blog hit it big over the winter when real estate was slow and I could spend more time on it.  The spring is here and I'm absolutely thrilled to say I'm busy as hell with real estate, but sad to say the blog is suffering for it.  I will try to do better next week.  I'm really bad about writing anything too far in advance, but I'm going to have to start trying to figure that out. 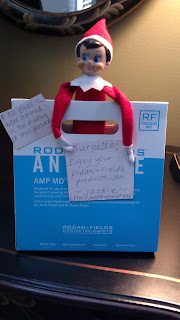 The highlight of my week was receiving an Elf on the Shelf stapled to anti-wrinkle cream.  What a kick ass way for me to notice the product you're sending me.  Obviously, if you ever want some Rodan + Fields anti-wrinkle stuff you should contact Jackie Pearson-Waters.  That little spiky roller thing doesn't hurt too much and I already look 39 and 11 months old, so it's working definitely!

The Top Read Posts This Week:

Open Letter to Samantha Brick - A slightly deranged and kooky lady who thinks she's too pretty for friends.  I gave her some tough love.

Me & My Cleaning Lady - It was good to see how many of you could sympathize with my plight.  I have since found out that I was not dumped.  All of her clients were given the Omaha story, so we're all on the hunt for someone new.  I got tons of leads from local readers (thank you very much) and I will be getting quotes from people next week.  Also, in response to the whole tangent about her possibly not being legal, etc.  She is most assuredly legal as well as the rest of her family.  I'm guessing that her husband had a business opportunity in Omaha that he couldn't resist.

Who is Attractive According to Gomer - Gomer thinks my brother is more attractive than me, because his family follows him around.  My brother and sister in law both weighed in in the comments section.  We've also decided to monitor Gomer's reading a bit closer, because we're not sure where he learned the proper use of "striking."

Passive Parents - This was a repost from the archives, but still a good one about telling instead of asking your child to behave.

Open Letter to Silly Celebrity Moms - This one hung around for another week, because Babble.com and HuffingtonPost.com reposted it.

My Favorite Comments of the Week (and My Response if Necessary):

I love that you say this is to save your marriage! If I wanted to keep my marriage safe, I'd need to hire a maid, cook and a prostitute. They could do all the work that my husband thinks I have all the time in the world to do. on Me & My Cleaning Lady

Hey Jenni...instead of reading Samantha's articles (sounded like it would be a waste of time anyway!), I decided to read all 103 comments. TNMom said Kim’s comment would make it into the best comments of the week...and it should…but…OH MY GOSH! You are definitely going to have a tough time filtering down to only a few comments, because there were a TON of great retorts! The lonely, negative (aka “Jen-attacking”) one by “Anonymous” had a great follow up by Marcella!! “Oh hey, welcome to Jen’s Blog, Samantha.” That was perfection!! Loved it when Lauren & Bev brought Gomer’s name up about his thoughts on beauty…(I truly laughed out loud!!). Knitwit’s phrase: “turn-style on her vagina” had me spewing coffee all over the keyboard….and then Michaela’s “fug ass nose” comment had me on the floor. Best hour I’ve spent in a long time. Love your blog, Jenni! Whoops! That’s your old-time name…I must remember it’s now “Jen.” Anyway, as I said…LOVE your blog on Open Letter to Samantha Brick

This should just be my wrap up, Laurie.  I couldn't even find half the comments you mentioned, but I believe they're out there.  Take a look, folks.

This response is beyond catty and asinine, and thousands like it have been circulating around the Internet for several weeks. I've gained nothing reading this, but lost quite a bit (mostly, my time and a few brain cells). Your audience is clear: Catty, bored women with nothing else going on. I think you bolster Brick's point, ten-fold. on Open Letter to Samantha Brick

as Marcella said: "Welcome to Jen's blog, Samantha!"  I love it when readers take care of my business.

The real question is...does Gomer think she is attractive? on Open Letter to Samantha Brick

I'm afraid to ask.  My delicate senses can't take anymore rejection and especially if he thinks she's better looking than me.

Like a hooker in a hotel...you nailed this one perfectly. She's a dog and he's a 'salaud' !! on Open Letter to Samantha Brick

I had to Google "salaud" and I got rotten and bastard.  Let's go with bastard - so much better.    Oh and I will be using "hooker in a hotel" in the future.  Great line.

I have enjoyed your blog for awhile now because of your snarky humor. I love snark! I have always thought you were funny but with this post you have shown us something more. You are also an intelligent and compassionate woman. It may hide behind sarcasm and snark most of the time, but it is there. So for those who bash you in comments and make claims that you put other women down.... I hope they read this post and can now see that when it matters, you have another woman's back and speak up for the things that really matter. Hell no that is not fancy clothes or perfect parties. It is self-respect and learning to no longer be used and abused. Good for you on this one Jen! on Open Letter to Samantha Brick

This one made me blush.  You've figured me out.  Thanks for the comment.

I had never heard of her before this, and I hope I never hear of her again. What is she, the Brits' answer to Snooki? Anyway, you replied better than I could. Or at least better than I would. Thanks for that. onOpen Letter to Samantha Brick

I've only been reading for a week, but if we weren't both married, and if I were a lesbian, I would totally make out with you. You complete me. (But I DESPISE Tom Cruise, so the fact that you make me want to quote him makes me want to punch YOU in the throat...) on Ultimate Blog Party 2012 Welcome

I despise that little man too.  Please don't quote that hideous movie at me, even though you had me at Hello - I mean our shared hatred of Tom.

1. Having never heard of lochia I decided to Google it....That little piece of enlightenment is exactly what I needed at 37 weeks preggo. Guess what I'll be thinking of constantly? Even without the definition the word itself just sounds gross, like areola or caffeine-free. 2. Would eating your own placenta be considered cannibalism or recycling? on Weekly Wrap Up 4.14.12

I'm thinking composting since you make a natural waste by-product.

Such good advice. I would have read it even if it was total crap, because your title is awesome. But you gave me a lot to think about for my own blog. So you're saying that pintrest is more than a soul sucking suburban mom addiction? That'll teach my husband to roll his eyes at me! on My Blogging Advice

Pinterest is the shit.  Pin your posts and watch the readers come.

My 7 year old son came home from school one day last week and said his friend thought I was hot. I have to say, it boosted my ego and I even texted my husband to tell him. I know its sad, but I'll take a compliment from wherever I can get it! on Who Is Attractive According to Gomer

I'm not gonna judge since several years ago when I was pregnant with Adolpha I was driving to the grocery store with my windows down and I got to a red light and two teenage boys in the car next to me invited me to a party, because they could use some more "hot girls" there.  I'm sure they were playing me so I'd buy beer, but it didn't matter.  Sometimes when I'm feeling low I still think of those 17 year old boys who called this old, pregnant lady hot.  They were a little grossed out when I said, "I'm 35 and  married....and pregnant."


My 2 year old crawled into bed by us one morning. He put his hand on my cheek and said "Momma. You're so puuurty." My heart swelled. Then he reach over and scratched our dog's ears and said "awww! Puppy, you're so puuurty." And that hallmark moment ended quickly. on Who Is Attractive According to Gomer

I noticed Uncle C.B. commented on your blog so I checked out his picture beside his comment...I personally think he is a little nondescript! on Who Is Attractive According to Gomer

This is making me giggle. Especially "He's just very...uhh...striking when he walks into a room. (WTF, Gomer? Have you been reading Harlequin Romance novels? Who says that?)" Seriously, where did he get that? Next he'll be saying he's getting the vapors. on Who Is Attractive According to Gomer

I am a relatively new reader and I've already read two extremely funny posts recapping conversations in your car with your kids. When you get the van, you might want to rethink the DVD system. Is the loss of great material from your kids and their friends worth the "piece of quiet" (a phrase coined by my youngest) you'll gain from the DVD system? Not to mention the turf wars and the aggravation from them fighting over which disc to watch and/or the enforcement of any rules you put in place regarding it's use? LOVE my 9 year old Odyssey as much as the day I brought it home, and I haven't regretted the lack of DVD for one minute. on Me - For Wanting a Minivan

I'm actually thinking of having the van outfitted with cameras so I can "vlog" my convos with the kids, my writing doesn't do them justice.

Re: the who's attractive comment above. My 15 year old (with autism) says "give me the vapors" with frequency. It is a quote from Pinocchio. He repeats things due to the echoalia and his autism. But that one makes me laugh every time.

::happy dance:: I made the weekly wrap up! And that's saying A LOT since there were so many hilarious comments this week. You have some of the funniest readers, Jen. :)

How do you know you are truly exhausted? When you read "piece of quiet" and it takes you about 2 minutes to come up with the exact phrase "peace and quiet". SMH...quality sleep, how I miss thee!

You know it's bad when it took reading this comment to figure out the phrase was wrong. :/ And I just got up from taking a nap...

If you want to get your husband off your back about pinterest just cook a few new recipes from it and casually mention it was from pinterest. Then the next time he sees you on it search desserts and ask him what he wants you to cook from there. Once he pictures pinterest as a cookbook with photographs he will leave you alone about it!

Jen- Congraulations on the quick success of your book! Those elves....they do more than make messes. They cause virality and best-selling authors! :)