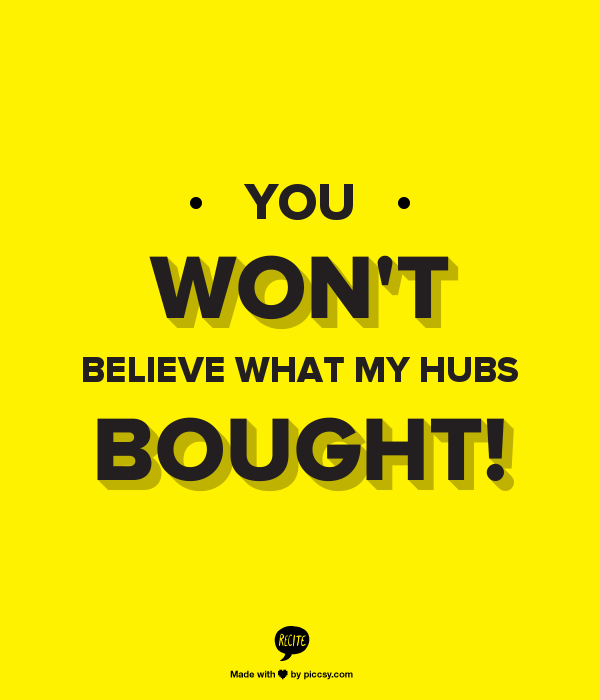 After 11 years of marriage you would think I would have learned by now that I must double check anything the Hubs buys online that he thinks is a super duper deal.

Don't get me wrong. A lot of the time, he's an amazing bargain hunter. He finds $90 sweaters for $12 and we can never eat out unless he has a buy one/get one free coupon or the restaurant has a dollar menu. HOWEVER. He has a hard time reading the small print. He focuses a lot on the "original" price vs. the "sale" price and the rest of the details go by the wayside.


Like when he bought speakers for our surround sound system. When they arrived, the Hubs was out of town. I opened the enormous boxes and was greeted by two four feet tall speakers.

"They're so big!" I complained to the Hubs on the phone.

"They're only supposed to be 48 inches," the Hubs said.

"Ohh. Riiight." Small print AND math are not his strong suits.

"Also. One is black and one is white."

"They are? Wait. Let me look at my receipt. Yeah, it says it down at the bottom really tiny that they were the only ones left and they were not the same color. Oops."

Both of my kids want high top sneakers. Apparently, the 80s are back and my kids are embracing the trends as much as their mother did. The Hubs found a super deal online for Puma high tops. He wanted to get them for their birthday. I really didn't care, because high tops don't hurt as much as a Lego when you step on them, so I was just glad we were moving into another stage. The Hubs showed the kids the shoes online (because he can't keep a surprise) and they were very excited.

For a week I've heard about these amazeball shoes. They're so cool. They're so rad. They were such an ah-may-zing deal. No one could score a deal like the one the Hubs did.

Then. Friday I checked our mail and we had the ittiest bittiest wittlest cutest box you've ever seen stuffed into our mailbox. The return address said Puma. "Hubs, did you guys buy extra shoe laces or something?" I asked, because that's all I could imagine would fit in that box.

Yup. He sure did.

We opened the box and found Gomer's pair. They were sparkly and silver and purple and light blue and were size 4 - toddler. Gomer is eight.

No wonder they were such a good deal, Hubs! They're for a baby. Also, these are girl shoes.

"They didn't look so sparkly online!" both the Hubs and Gomer said. Uh huh. I think Gomer has been well-trained by his father.

Saturday came and once again we had a box from Puma in the mailbox. This one was a normal sized box. "Mine are right!" Adolpha exclaimed. It looked like she was right. Until I lifted up the box. It was so light I wasn't even sure toddler shoes were in there.

Adolpha got a pair of totes adorb size 4 toddler high tops too. She is six.

We found one person in our house who can wear these shoes. 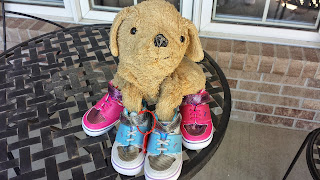 I don't care how good the deal was, no stuffed animal is going to wear nicer shoes than me!


Want to read about how I met the hubs? It's in my NEW BOOK!

Hopefully you know someone who is pregnant and can give them a a baby gift?

I almost snorted a pretzel when I saw the puppy with the entirely too cute for words baby sneakers.

I'm the one who doesn't look at the fine print when shopping in our house. My husband always has to point things out to me so I don't get TOO excited.

They are totally too old for foot binding, which is too bad because those kicks are sweet.

They are darling! (Tiny, but darling!) If they are not returnable, you could probably get a good price reselling them.

OMG, I just did the same thing 2 weeks ago with some green Converse that my daughter wanted! They were so stinkin' cute I almost kept them.

You should do a giveaway with the shoes!

I think I saw a Groupon for toe removal.. I'll send it to the Hubs. We'll make those shoes fit yet!

Oooh I love that idea!

I'm pregnant with a girl! I'll take them!

My Hubs did the same thing exact he bought boys size 8 instead of toddler size 8. And he's always trying to get the best deal instead of considering quality, which is why our baby video monitor is a P.O.S. and is about to chucked out the window! And when I send him to the store for Manwich mix, I mean Manwich, not store brand sloppy joe mix. Ugh. :)

My mom does the same thing.

My dad does this, too!! One time he bid on a car on ebay because he couldn't believe how cheap it was! He won the bid, and about a week later, he got a framed official photo of this car in the mail.

That is hilarious! I know those weren't cheap, either! He has a point about technology, though. Doesn't he? No?

Omg this is hilarious! Even funnier is how my first thought was to buy them from you. For my toddler. A boy. Who wears a 5.5-6.

Smh- me n your hub would have some interesting conversations if we ever got these great minds together.

LOL This is great! Poor hubs though, seriously he is trying right? Just make sure he doesn't try to buy you any lingerie or feminine products. You never know what might show up then!

My Husband did the same thing! He found the cutest uniform shirts on Amazon and because I had been nagging at him for waiting until the last minute to get the kids their uniform clothes and we only had 3 days before school started, I told him just to hurry and order without checking them over. He bought Medium's which he said covered the size 8's that me needed. Shirts came and it was obvious they weren't the right size. I looked at the receipt and they said Medium Little Boy, and Medium Little Girl. When I told him Little meant toddler, he said that was BS cause our kids are little. They are 6 and 7. Anyways, we had to go and buy them from Walmart that day. You would think he would have learned. He bought shoes the following week and surprise, he bought 1's in little kid again... Ugh!

I sniggered way more than reasonable reading this. :)

"Yeah, those are flowers swirled into the pattern too. Gomer would have looked precious in these."

Note to self: avoid drinking tea when reading this kind of comment. Or buy a waterproof computer. :)

I don't know, I think that stuffed pup looks mighty proud with that mishap. Good luck getting them off.

pwahahaha! I was laughing hysterically through the whole shoe thing while simultaneously feeling terrible for your husband and kids! :D:D:D