This week was a big week around here. The kids went to school for an entire week!!! The snow is melting!!! The sun has been shining!!! I don't want to jinx it, but it looks like spring might actually come to Kansas (sorry East Coasters, looks like you have to wait a bit still).

Oh yeah, do you need a new book to read? Because I Just Want to Pee Alone is available. Boom. It's already Number One on Amazon. It's hilarious and a must have for every mom on your list. However, just like me, this book is definitely R-rated. Check it out here. 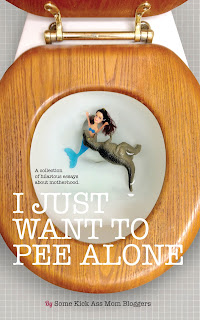 Here's a tidbit for ya: 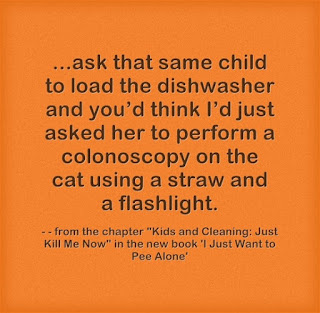 Open Letter to Marissa Mayer - Marissa Mayer is the new CEO at Yahoo and she is laying down the law. I'm thinking about getting a job at Yahoo, because I'm running low on highlighters. Mmm . . . free office supplies.

Taylor Swift - Oh no she didn't!! T-Swift drank some crazy lavender lemonade and then said my BFF Tina Fey was going to hell. Taylor needs to get the stick out of her ass. Meanwhile, Swifty just sold the house she bought on the Kennedy compound for a million dollar profit. Damn! Maybe she can buy a sense of humor with that money!

Life is Hard When You're Six - Adolpha let me know that it's not all rainbows and puppies when you're six.

Sports Illustrated Swim Suit Edition - I think I've been living under a rock for several years and didn't realize that this issue doesn't really include sports or athletes. WTF?

My Favorite Comments of the Week (and My Replies if Necessary):

There are so many things wrong with Taylor Swift right now. First of all, she's offended by what Tina Fey and Amy Poehler said about her? But, she was all forgiving when Kayne West slammed her for her shitty music? (his words - sort of, not mine). Secondly, Taylor Swift dates high profile douche bags. My guess is she's a virgin and when these guys can't get in her panties they give her the boot. The fix? Stop dating actors and musicians who can bed any girl they want. Duh. on Taylor Swift

Oh, T. Swizzle... Here's the thing: Smart women don't help dumb women just because they both have a vaginas. Tina and Amy did you a fucking favor by even breathing your name that night. Get over it and stop embarrassing yourself. p.s. Can't wait to sit at the cool table in Hell! Fuck yeah! on Taylor Swift

I use to hold your Elf on the Shelf post as the gold standard of bat [email protected]$t crazy, funny post, but I think this one now has the slight edge. I also have put in a reservation for the circle of hell where Tina and Amy (and now you) could potentially reside. Harps and clouds are overrated. on Taylor Swift

I will stand behind Swift dating a bunch. Remember where we were 20 years ago? DATING A TON OF GUYS. Most were douche bags. It's the joy (not) of being a girl in your 20's. But Taylor Swift, if I can give you a piece of motherly advice. Thou shall not ever take aim at Tina and Amy. Not in Vanity Fair drinking lavender lemonade. Not on Twitter. Not ever. You call them. Apologize. Send a nice gift basket. Preferably something that includes chocolate. These women have kids and chocolate will sell like gangbusters. That's what you do. on Taylor Swift

I obviously am one of those who lives in a cave, cos I MISSED this one. First of all, as a 40-some odd mum from Canada who's heart was broken when Michael J Fox married a Yank - I'd like to say Alex P Keaton Jr is MINE!!!! So.....paws off MS Swift!!!! You're not ruining this man. But let me get this straight, she can date who-ever she wants. Tell the world they are jerks because they dump her. Write songs about them and make millions. Poke fun at others. But no one's allowed to poke fun at her? Grow.The.F.Up!!!!!!! on Taylor Swift

The list of indignities is unending! I think I'll stick with being thirty-mumble. on Life is Hard When You're Six

Yeah, a life watching cartoons and having people do stuff for you is such a difficult burden to bear. As my 8-yo says "I need another assistant, besides you." Thanks a *bleeping* lot, kid. on Life is Hard When You're Six

"Besides, a little glitter would actually improve the decor around this place." My (almost) six year old daughter informed me that she doesn't like my clothes because they are boring. She thinks I should incorporate sequins into every outfit. Apparently, she thinks I would look better if I looked like I was dressed like I was ready to club it up at Studio 54 in 1970s. on Life is Hard When You're Six

They should make a movie of Adolpha's life... maybe a "Triumph Of The Human Spirit" kinda thing. Call Meryl Streep! What? She can *definitely* play a six-year-old-- the woman is amazing. on Life is Hard When You're Six

Being CEO of Yahoo may be like be the CEO of Blockbuster A point to ponder. on Open Letter to Marissa Mayer

Wait... what? Yahoo is still around... I thought they went belly up years ago! on Open Letter to Marissa Mayer

My problem with it is she is building a nursery next to her office, but is now telling other parents you need to find child care for your kids. It's not easy finding good affordable child care. These families now have commuter expenses. What if the family only had one car because one worked at home? on Open Letter to Marissa Mayer

She's built a nursery next to her office. My guess is she has a nanny that goes to work with her and the baby every day. She's achieved her mega-corp position not just from talent but also because she's been the person who is often most willing to put in the longest hours. The point is, she DOES work from home. It's just not from her house. on Open Letter to Marissa Mayer

The Dose of Reality said...

Feel so great being included in the book with such hilarious writers! Thank you!

OF THE YEAR!? Cool. That is super cool. P.s Good luck with the book. pss. I am so tired of seeing it on everyones blog and saying how jealous I am, so for one last time, I AM SO JEALOUS. There out of my system :)