I know, I know. It's been a while since I've done a wrap up. I've been buried under snow, laundry, and children who never go to school. It looks like maybe next week they'll have a full week (just in time to be released for Spring Break).

I've also got a piece in the anthology, I Just Want to Pee Alone. Have I told you about this a hundred times yet? I have? Well, guess what? I'm going to talk about it a hundred more times. It is in the final production stages right now and should have a mid-March release. 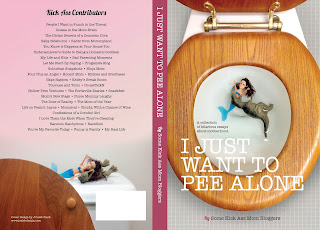 snOMG - Our winters are usually cold and drab and I like to spend my free time praying for snow. It looks like I got three years worth of prayers all in one week. I've been stockpiling discounted sleds in my garage, so we got to put those to good use.

Sports Illustrated Swim Suit Edition - I was lamenting the fact that ladies don't have a swim suit edition to ogle. I've since been directed to buy a sexy fireman calendar or subscribe to the International Male catalog. Several helpful readers have actually sent me nudie pics. They're giving the Hubs a complex, so I think we're good now. Thanks.

Is it Possible to Be Too Sexy? - The Hubs has started working out too and he's worried he needs to take it slow or else he will get "too big."

The Hubs Thinks My Readers are Hot - The Hubs keeps track of my Twitter followers for research purposes. Honest.

My Favorite Comments (and My Replies if Necessary):

Honestly, the only reason I searched for photos from the SI issue online this year was that we had dinner with another couple and he was talking about the cover model being heavier than usual. (I know this guy he means it.) Was watching the Super Bowl with him and he commented on Beyonce being heavy. That just shows how screwed up this is. I know, I know -- I should have probably punched him in the throat. Twice. on Sports Illustrated Swim Suit Edition

Surely a double standard, but equal male exposure is NOT the answer. Even a super hot dude in a thong makes me flinch. Yuck. Yes, Magic Mike was a disappointment. I didn't need to know that male strippers had feelings. But, on the bright side, Channing Tatum has a killer bod and is an amazing dancer. If he'd danced with fuzzy nuts and his dong flapping, I don't think I would have been as entertained. on Sports Illustrated Swim Suit Edition

Hubs has a point. I have always sworn that the scrotum is absolute proof of evolution. I just can't bring myself to believe in a God that would create that ugly sack and say "Perfect!" on Sports Illustrated Swim Suit Edition

Yes, yes, YES! More naked men all around please. Speaking of which, have you seen "Troy". I will just say I do NOT watch it for the acting. on Sports Illustrated Swim Suit Edition

Well, since funny is hot, I hope I qualify. Also, ladies, he was talking about me. My picture is a teddy bear with a camera. ;) on The Hubs Thinks My Readers are Hot

I just dropped a lump of buttery cracker and cheese on my leg and then ate it off my trousers. Pretty sure it wasn't my twitter pic. on The Hubs Thinks My Readers are Hot

I used to be skinny/fat and now I'm just full-on fat/fat. I'm desperately clutching on to my quick-fixes, like flowy blouses, Spanx and spray tans. 'Cause everybody knows tan fat looks way better than Casper fat. That's just science. on Is it Possible to be Too Sexy?

My mom tries to make like she didn't hop on the Jennifer bandwagon by saying that she named me after the actress Jennifer Jones in the movie "A Portrait of Jenny". I have another friend who swears her parents named her Jennifer because they never heard it before. I was born in 1973 and she was born in 1971. Gimme a break, goofball parents!! on People Who Do Studies About What Children's Names Mean For Their Grades, Their Future Salaries, Their Luck Factor, Blah, Blah, Blah

Since my name starts with a 'V', I'm going to consider it a win that I can even walk erect. That I can usually form coherent sentences and get myself through the world with minimal destruction in my wake? All icing on the cake, baby. on People Who Do Studies About What Children's Names Mean For Their Grades, Their Future Salaries, Their Luck Factor, Blah, Blah, Blah

This is a first! This is an award-winning comment. As of right now, this comment has 27 responses! This guy has won The Douchiest Commenter Award! Congratulations Timothy Faust! Your mom must be so proud of you! If you haven't already, be sure to pop some popcorn and then check out the comments and see all of the brilliant responses Timothy received. This guy really knows how to start a conversation!

What would the grounds of the suit be? How would you prove financial damages? There really isn't any legal grounds for a lawsuit. While what he did is abhorrent, it sounds like it has been handled correctly since charges have been filed. Don't expect him to get any more than a fine, which would be the appropriate punishment for any first time offender. Secondly, I hate people that bring their screaming kids on a plane. I can understand, if it is your first time flying with your child and you don't know how they will react, but I seriously had a woman sit down next to me with her crying three year old, and she says, "I hope you brought ear plugs because every time we fly he does this for hours." Really lady? You know he does this and you fly with him anyway? Next time drive or leave the kid at home with a sitter. I am so sick of parent who think they are untitled to make everyone around them miserable just because they are parents. on The Guy Who Hit a Baby on an Airplane

I can not wait for your next book. I loved the first one so much and I bet this new one will be even better!

Oh yes!! That guy wins Douchiest Comment hands down!! What an asshat.

Voted and am looking forward to the new book now!! :)

Oh yeah. That guy was basically chewed up, spit up and then pureed by the commenters. It was a beautiful day.

I've been talking about Douchiet Comment Guy ever since I read I the post. Some of the comment made in response to what he said are priceless.

Oh my gosh! Loved these so much. Really looking forward to your next book.