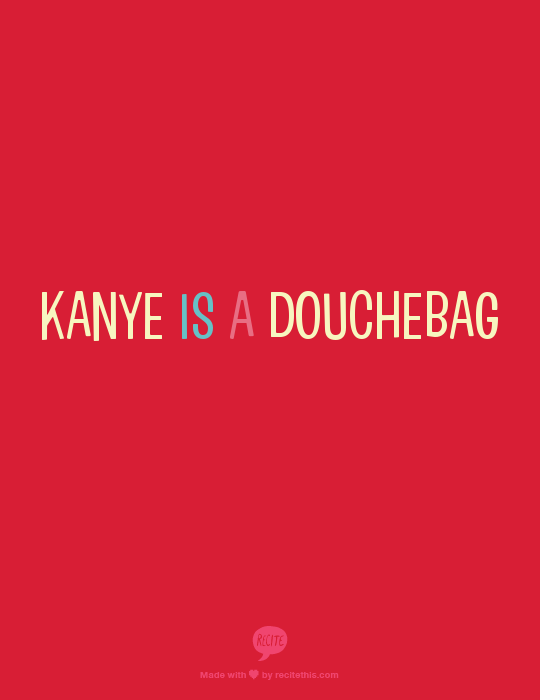 Kanye West thinks he's Jesus, so I guess I shouldn't be surprised that over the weekend he tried to get a couple of disabled concert-goers to stand and listen to him sing.

That's right, this asshat was giving a concert in Australia and he stopped his concert because he wanted everyone in the room to stand. He refused to continue the concert until everyone stood up. He made a huge deal of singling out people, because that's what you do when you're so famous that you're out of touch with reality.

Once he had shamed the entire stadium into standing, he realized two people still weren't standing. Kanye was so perturbed by this obvious snub that he sent his body guard into the crowd to see why they weren't standing. Whoops. One had a prosthetic leg and one was in a wheelchair.
Watch the fucking douchebag in action. (Click here if you're on mobile. https://www.youtube.com/watch?v=De_1VKqNoLg)

First of all, I would never in a million years find myself at a Kanye West concert, but on the off chance that I did (like some Kardashian third cousin was holding my family hostage and demanding I attend or else they'd kill them) I still wouldn't stand just because this asshole told me to. What the fuck, Kanye? People paid good money to attend your concert where they have seats to sit in. No one needs to stand for His Highness.

Also, I can't believe that he actually sent his bodyguard to investigate why people weren't standing and dancing to his shitty music. I can't believe he complained, "This is the longest I've had to wait to do a song, it's unbelievable." Not as unbelievable as you, you stupid POS.

I am a little surprised that once he realized they couldn't stand, he didn't go down into the audience to lay hands on these people and try to heal them, because y'know, he's a miracle worker.

Did you sign up to get a free bookplate?

Did you get my memo?

I am signing books in Chicago and Atlanta -- come see me!

This blob people call Kanye really is a worthless POS! He goes on proving it all by himself!

I don't get why they're famous. If he'd come down to see why I wasn't standing (if I wasn't moved to stand on my own, it would be because of the multiple scars on my leg from a full reconstruction). Yeezus is right.

Lay his hands on them...LMAO

He is such a douchenozzle.

Wow, Kanye. How about removing that sizeable FOOT from your loud-ass mouth?? I know a couple of former fans who might want to use it. To stand up and beat your ass with it. Nippledick.

Most of the time when you throat punch someone I agree and think they're a douche but don't literally want to punch them in the throat. I honestly, literally, wish I had the opportunity to throat punch Kanye West with no consequences. It makes me sad that he's so famous because it means there are millions of morons on this planet who actually love him and his music.

I think what's even more disturbing are the idiots booing and chanting "stand up." That and the fact that this man has procreated...

Hey Kanye: Whoever said "There's no such thing as bad publicity" was LYING TO YOU. How about you try making headlines by being a nice guy? It'll go viral, I promise. Because people would be SHOCKED.

Ugh - what an idiot!

Piece of shit is right. The whole klan of them, Kimye, always made me sick, but this dumbfuckery is pretty hard to top. What an asshole.

How was he holding everyone in that audience's family's hostage? He must be Jesus or at least super human. Praise be to God.

Hope someone brakes his legs so he has to sit and listen to his shite music but then again he's the only one likes it. Prick

He's a fucking pig and the people will soon respond to this behaviour..

Who is Kayne West?

Holy shit, I love this entire post so much because I couldn't have possibly said it better myself. Best part? Your opening line. Hilarious--and at the same time, it perfectly makes the point. What an asshole!