The internets are abuzz today about the "sexy mugshot." Surprisingly it's a man. When I first saw the headline, I was sure it would be some scantily clad meth head chick with good hair or something.

Instead, I clicked the link and I immediately fell down into the deep blue wells that are Jeremy Meeks' eyes. Be strong, Jen! I thought. This guy is a dangerous felon and it's not just his chiseled cheekbones that make him wanted.

I wasn't the only one seduced by Jeremy's soft, full lips. There are over 15,000 comments on the Stockton Police Department's Facebook page that say things like "Is it illegal to be that sexy?" and "He got arrested for stealing the hearts of ladies!" 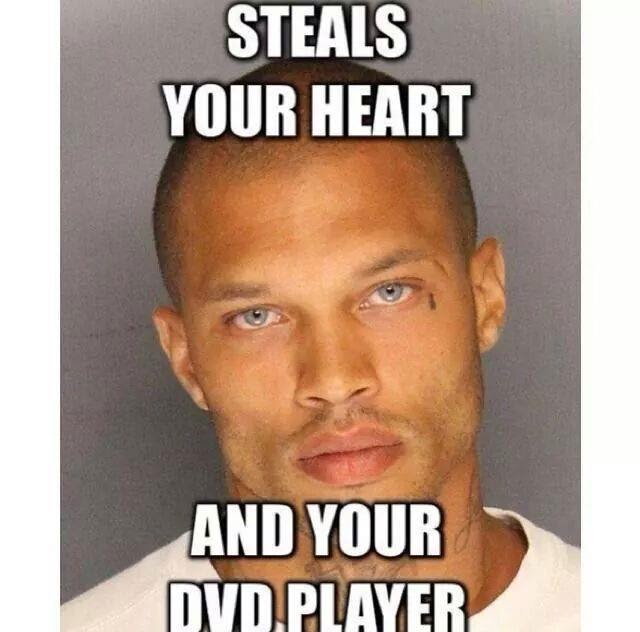 Hold on a second. What am I doing? Yes, he's a good looking guy with eyes like tide pools that suck you in and you want to wipe that sad little tear from his face but you can't because he's permanently sad. BUT don't fall for his pretty face! Sure, sure, he might be innocent this time, but he's a convicted felon. This time he was arrested because the Stockton Police Department is trying to crack down on the recent shootings and robberies in the area.

Jeremy Meeks is a convicted felon who was arrested on felony weapons charges. He had a gun illegally. Sure, even the thought of him holding his gun is kind of hot. But then I imagine him holding it sideways and saying "Sayonara!" before he blows my head off! This guy is no good. He's a REAL bad boy, not like the ones you read about in your books. Notice how quickly everyone jumps to the defense of Jeremy. He must be innocent until proven guilty, because he's HOT. What about the three other guys arrested with him? No one is claiming they must be innocent too. The second most liked photo in the line up is another fairly good looking young man with squinty bedroom eyes. The least likes? The old man. WTF, America? Why do we constantly let good looking people get away with murder?? If this guy was missing teeth and had bugged out eyes no one would give him another thought. They'd lock him up and throw away the key. There wouldn't be an ounce of hesitation. But when the guy looks like a criminal from central casting, everyone sits up and takes notice. The newspapers put him on the front page and the women of America (and a few gay guys who are hoping prison turns Jeremy) vomit compliments and clamor to be his number one fan.

How sad is it that Jeremy Meeks is getting all the attention on the Stockton Police Department's Facebook page when just yesterday they buried one of their fellow officers? Did Officer Scott Hewell's memorial service get over 52,000 likes and 15,000 comments. Nope. It got 390 likes.

There is a GoFundMe site that has been created for Jeremy to help him raise his $900,000 bail money. Did the old guy get a GoFundMe account too? I doubt it. What about the family of Officer Hewell?

I don't think Jeremy needs to worry about his GoFundMe account. The way women across the world are wetting themselves to line up to compliment his steely blue eyes tells me that Lifetime, TLC and Bravo aren't far behind with a TV contract for this guy. Coming to cable TV next fall: America's Next Top Model: Big House Babes or America's Most Wanted -- In My Bed.

Yes. That is all.

Every word rings true. What is America's obsession with putting people on a pedestal because of their looks and not giving a second thought to their behavior?! Officer Hewell deserves to be remembered and talked about...not this guy!

I don't think he is that attractive. He gives me a "creeper" vibe... lifeless empty look.

Did anyone set up a Go Fund Me account for the fallen officer's family? Also teardrop tattoo? Means he killed someone. Stay classy women of America.

This kind of reminds me of when Paul Walker died. By alleans, he seemed like a cool guy and it's very sad that he died so young but would people have been so sad and been sharing his photo and their condolences on fb thousands of times if he had been a less attractive actor? People need to put less emphasis on the importance of looks in this society.

There is NOTHING handsome about this mug shot, or any mug shot for that matter.

And to think my husband scolded me when I told our son, "You're lucky you're good looking. You're going to have an easy life." See?? I was right! I didn't make the rules.

Sure he's hot. But hot doesn't equal good. This guy out on bail kind of scares me. You just know some woman is going to try and "reform him" and end up in trouble. The guy is bad news.

No, I think it was because he was an actor. A rich FAMOUS actor. Sure he was good looking, yes. Duh. It's Paul Walker. But HE WAS AN ACTOR.

He looks like the creepy, soulless younger half-brother of that GORGEOUS guy from Grey's Anatomy, Jesse Williams (http://www.imdb.com/name/nm2222264/?ref_=tt_cl_t13). Now there is someone to swoon over--beautiful, smart (he used to be a teacher), and a loving father/husband.

I want a picture of your milky blue eyes!!

I agree. At first glance, yes, he is handsome. But then you take a long look, and you see the crazy in those blue eyes.

Brilliantly written my friend! I thought the same things you did about him. He's hot and I want to hold on to that but he is a very dangerous man! For almost a million dollars bail, the court thinks he shouldn't be out wandering the streets, no matter what kind of weapon he has in his pants....

Okay look, Jen. I really think you need to read more bodice rippers, which I started reading at age 8. To date I've read "Devil's Desire" fifty-eight and a half times. Okay, so Jeremy isn't REALLY a felon, no. He's a duke of a deposed oligarchy in the Berumda Triangle (and I think you know to which Triangle I refer). So, okay, he's taking the fall for the deposed king, his father, and he's really been educated in Edinbourogh (how the fuck do you spell that?) and speaks like twelve languages, even the one where tongue-clicking is a letter, and he's been a gentleman all of his life, but now he's on the lam and having to hide his true identity and has to carry weapons to protect himself from capture (to be fair it was a musket from the 14th century with only one steel ball in it -- Jen! Get your mind out of the gutter!). And Jeremey is more than generous. Any maiden who can raise his bail will receive her own principality with Udon noodle chefs and, when Duke Jeremy is reinstated to his birthright, he will be happy to use his steely manhood to take the donator's maidenhood and make her with child. So seriously, give the guy some slack. Blue. Eyyyeeeeesssss.

Thank you. Having met and talked with far too many victims and families who have lost loved ones to gun violence, there is nothing attractive about anyone who chooses to promote violence, especially with a tool as effective and deadly as a firearm.

You said everything I wanted to say--but wasn't sure how to say. Great job!

Shannon that was flipping brilliant! !

Blah blah blah. Everyones rants are the same. Who thinks he's an om guy? I think ppl were just making jokes.AND those who are commenting that page still...its too late...they ruined it go home. Haha

Where's the gofundme account for the family of the slain officer? I saw all the publicity this guy was getting and it turns my stomach. I'll bet money on it that he's used his good looks in the past to manipulate his way in and out of all kinds of shit. He's like a book with a gorgeous cover and shitty writing on the inside. I'll bet he kicks dogs for fun.

Yup. I saw the headline on FB & I thought, "How fucking stupid can women get?" It really makes me sick.

Maye they should have posted this picture. The people that donated to his bail fund should be forced to work with crime victims to see what thugs like this do.

Apparently he is not that good looking, he just takes a great mugshot. He has a BAD jacked up grill. Plus he is NOT interested in any of the ladies that are interested in him, lets just say he will be popular in prison.

he does have very nice eyes.... but overall, something isn't working for me. something is .... off. besides the rap sheet I mean.
thankfully, I have worked in a male prison and am now immune to such bad boys.

I don't blame this guy. I do blame the couple hundred thousand women that got moist over him. If all of them who liked his FB page donated a $1 to his cause, we're not having this discussion anymore. Cheap women.

Anyway, his "Gofundme" page went from being run by his hot check writing mom (I guess someone found out that people knew this already) to his carpet munching Cali Air Nat'l Guard sister.

Did I Just Say That Out Loud? said...

Ah yes....that deep, soulful, troubled, needy look. Attractive at first blush and then I think.....reminds me of a guy I dated. He shot me in the face with a pellet gun at the end. Learning Experience. For any of these ladies falling all over this guy a similar experience would be karma...and hopefully not fatal.

Neck and face tattoos automatically take people off the 'hot' list.
I love your blog btw!