Have you figured out yet that I like publishing anthologies? Well, I do! I think anthologies are awesome, because I can put the book down and come back in a week and not have to remember which two fellas our plucky heroine is waffling between. I think anthologies are a terrific way to discover a new writer that I didn't know about before. I'm never bored reading an anthology because each chapter is a totally different voice from the one before it or the one after it. 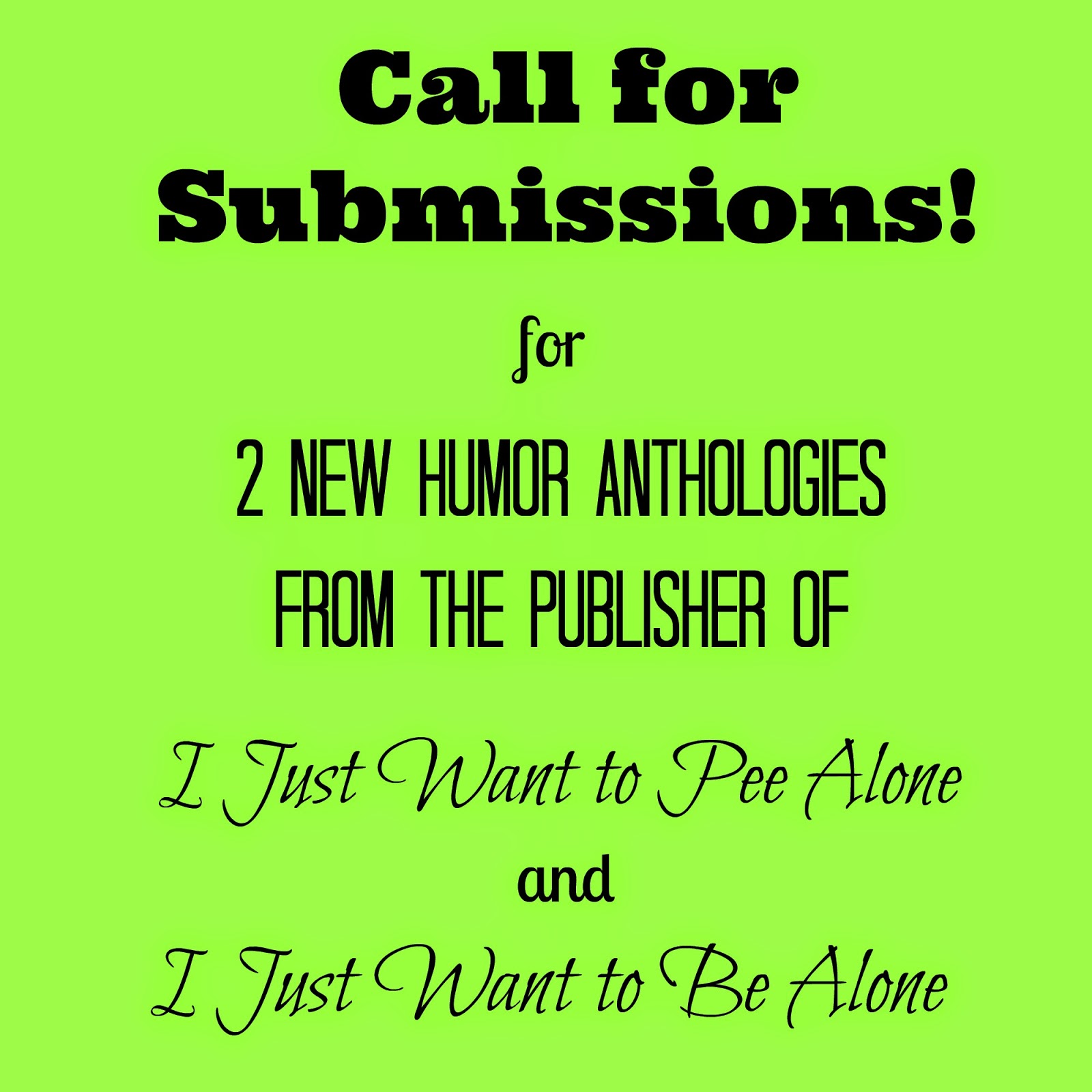 This time I want to do letters of advice to teenagers as they leave the nest. One book would be addressed to daughters and one book would be addressed to sons. I'm looking for funny, hysterical, and/or make me cry essays that have never been published before. I know what you're thinking: but I don't have kids and/or my kids are little still. No problem! Get creative! Think outside the box! Are you interested? Great! Check out the full list of submission guidelines below. The submissions are open to anyone, so if this doesn't sound like your cup of tea, but it does sound like your neighbor's, then send him/her this link and let them know.

Hey fellas, did you see what I did there? I said "him/her." In the past, I've preferred to work with the ladies only, but this time I'm interested in what you have to say too.

Submission Guidelines (Due to the overwhelming response, I must INSIST that you follow these instructions to be considered):

Send submissions to [email protected]. Subject line must read: SUBMISSION. Submissions MUST BE a SEPARATE .doc file attachment with a short bio and the following applicable social media information:

1,000 - 2,500 words (I'm super flexible on word count. I want the letter to be how many words it needs to be, so don't worry so much about word count as you do about writing a great piece.)

HYSTERICAL - make me laugh and spit out something or make me cry like a baby. Basically, make me feel something.

Due September 1, 2014. (No one will be notified about the status of their submission until AFTER the deadline.)

Compensation: The book will be published in March 2015. 90 days after publication I will pay each accepted contributor $100. The essays need to be previously unpublished material. You retain the rights, but I would require you NOT to repost/print the essay for five years from publication. You can post an excerpt of your letter on your blog to encourage sales. You can be anonymous, but please be sure to remind me in your submission that you are anonymous. There will be a bonus program TBD.

There will be discounted copies available to you to sell on your sites. I will take care of getting the book edited, the layout, the publishing, and cover art. We work together to market the book. If you're interested, please email me your submission at [email protected]com.

In case you don't know who I am, here's my brief bio:

I started my blog People I Want to Punch in the Throat in April 2011. In December 2012 I had 70 followers and I wrote a post called "Overachieving Elf on the Shelf Mommies." In two days that post went viral and I had over 1 million pageviews on it. I worked hard over the next year to capitalize on my luck. I now have over 180,000 followers on Facebook and 8,200 followers on Twitter. I have self published three books in two years and I've sold over 40,000 (and counting) copies. One of my self published books has been acquired by Random House and I have a second book coming from Random House in September 2014.

Awww darn. Can't participate. I don't have teenagers. Or kids for that matter. Haha.

I am sooooo there. On both. I have too many kids and too much experience with teens. Count me in!

Since I have a teenage boy and a soon to be teenage girl I'm very excited. I will get my thinking cap on and submit! Thanks for the chance!

Sounds awesome! I wish I had teens. Gah! Wait, maybe not yet.

Go you, Jen--you have worked so hard to get where you are! Enjoy :)

You are a FORCE, woman! I don't think I'm a fit for these, but I will definitely be getting the boy version upon publication.

These sound awesome! The mouse is turning the wheels in my head as I type.

I have both a boy AND girl. They are littles still so I'm all over this like flies on poo!

This is right up my alley! I have a teenager (almost two), and I have plenty of advice that is ignored on a daily basis. It would be nice if someone listened to me for a change. Congrats on your new venture!

I'm all over it, like the stink cloud in an Abercrombie.

Sweet baby Jesus. You know I have four teens, right? I'm on this like the smell of Axe body spray in a junior high hallway.

Finally, the words of wisdom I imparted to my 23 year old daughter when she left,and which I'm told were "gloomy" can be shared with a grateful nation! Plus I have a 16 year old son, and I'd like to get a head start on some uplifting (some will say gloomy) advice for him.

Yay! On it! Thanks for the chance! Crossing my fingers and toes!

Sounds like I've got a new project to think about. Fun! :)

These comments are cracking me up. :-)

With two daughters, 11 and 13, I want to stick my head in the toilet and flush at least once a week...the rest of the time I'm unclogging the damn thing so this could be a sign I should write something for your consideration. It will be fun, and also a distraction from cursing myself for not buying stock in toilet paper and maxi pads. Also, I could really use the cash to buy some noise cancelling ear buds. Like some nice squishy ones that can be worn for long periods of time without making my ears sore.

A WHOLE chapter can be written on the AXE body spray thing. I can smell it for hours after my nephew leaves. HOURS...
I can SMELL IT NOW......Can teenage girls like this? Does it attract them? HOW?

Adrienn you must. You are how I found PIWTPITT...

I have laughed so hard at the things you write I've gotten a stomach work out at the same time.

This is need. I have two girls, and while they're both toddlers I can think of lots of info I'd like them to be armed with when reaching their teenage years.

Timely. Very timely. As my older daughter will graduate in ONE MONTH I really appreciate you making me do something that WILL BRING ME TO MY KNEES with emotion. Thanks a lot, JEN. You better have a towel handy when you open my email to CATCH THE FLOOD OF MY TEARS.

This sounds perfect as I have a teenage boy who thinks he knows it all already! Boy have I got a few choice words to tell him!!

apparently I'm a fount of ridiculously un-useful information and advice (so I'm proudly told), and I cannot wait to impart it to you, and possibly, the world!!! bwahahaha

I am one kid short of the Brady Bunch ... I am all over this like white on rice or like me on a bottle of pino. Thanks for the opportunity -- I've been waiting for my "in" ... think this may be it! : )

Well my kids are not teenagers, but I was once and man was I a total screw up.

My oldest son has been giving me teenage attitude since he was 8 and now he's officially a teenager, so yeah, I'm all over this. And I don't have girls, but I was a major pain in the ass, so I think I can summon some female teenage drama.

You took the words right out of my mouth, Kathy! I will be a-readin'...can't wait. (Or rather, TOTALLY can wait to deal with many teenage boys...)

I've been away for too long! Congrats on the great Random House publishing news!! Maybe I'll give this a stab. I have a teenage girl starting high school and I've already started composing a letter in my head of all the things I want to tell her. I may have to revise the version to make it PITWITT worthy. :)

Hope you are well and would love to catch up sometime. (Take Five is moving to Corbin Park in June/July!) Until then, let me know if you would like to chat--I try to get out on Fridays to feel like a normal person. :) Happy Mother's Day!

To which email do we send our submissions? The sweetsadiecreations or jenthroatpunch? Thank you!

[email protected] will be the best e-mail for me. Thanks.

This sounds fantastic! I have five daughters (three of them teens), I'll just consider this a primer for kicking them out of the nest. ;)