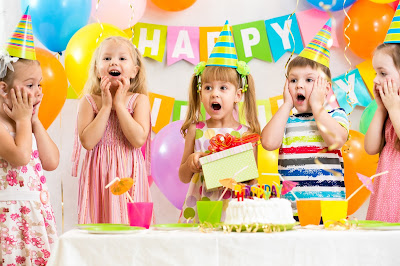 Surely by now you've all heard about the kid who got a bill for $24 when he was a no-show to a classmate's birthday party.

You haven't heard this overachieving tale of WTF?

Where have you been? It's all the talk in the carpool line, my email is blowing up with links to the articles, and one of my mom's friends even mentioned it to me today.

OK, so let me fill in those of you who must live on a deserted island. 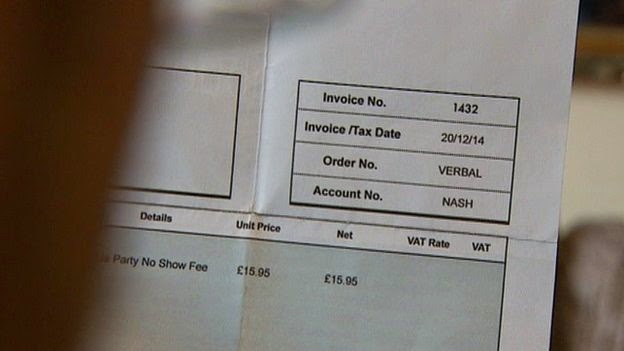 Anyway back to the story, the five-year-old invited a bunch of friends, but one friend, Alex, flaked out at the last minute because he wanted to hang out with his grandparents and thus was a no-show. Alex's mum didn't think it was a big deal since the birthday boy's mummy has always been so laid back in the past. She says she had no idea how to reach the birthday kid and she just figured it was no big whoop when they bailed.

Only the birthday boy's mummy had to pay for Alex when he didn't show up and she DID think it was a big whoop. She was ... how do polite British people say fucking pissed off?? ... perturbed, she was perturbed. So much so that she sent home an invoice in Alex's backpack for the $24 it cost her when he didn't show up.

That takes balls. Like balls the size of the Titanic.

I bow down, because haven't we all wanted to do that at some point in this miserable cycle of birthday party hell?

We've all planned a birthday party for our kid where you pay in advance and you get so many spots. Your kid invites the few good friends and then the rest is filled up with a bunch of people who can't commit. "Well, Destinee has a jujitsu tournament that morning and then we're waiting to hear if Lark has accepted her invitation to a playdate that afternoon. If the tournament doesn't go over and if Lark is sick or something, then Destinee will totally be there!" No. Fuck you. I've changed my mind, Destinee is no longer invited.

Those people are not as bad as the ones who do commit and then never show up. "Of course Remus will be there! He wouldn't miss it for anything! Only an apocalypse would keep him away." And then Remus never shows up and the apocalypse didn't happen so you assume that Remus must have been hit by a bus or something. You see his mom a few days later at Target and ask if Remus is OK. "He's great, why do you ask?" You remind her about the party he missed and her cold, dead eyes show no hint of recognition. "Party? Hmm. I just don't recall ever getting that invitation. Remus gets so many. Whoops."

Yeah! Wouldn't it be awesome to call up Brit mum and say "Bill that bitch, please."

However. As great as it would feel, you can't actually do it. Because that's crazy and once you start acting crazy, you can't go back.

See I didn't tell you the whole story yet. You see, birthday mum went off the rails! Not only did she send the invoice to Alex's mum when he flaked, but when his mum refused to pay, the birthday boy mum went to Defcon 1 and threatened to sue Alex's parents in small claims court.

Umm ... what just happened here, birthday boy mum? I was kind of envying you for a moment. I was thinking, Wow, this chick just stood up for all of the mums/moms out there suffering from the no-show assholes. Thanks, mum. But then your knickers got twisted and you lost your mind!

Plus, I realized I'VE been the mother of the no-show kid before. Now, I haven't stood up others as many times as I've been stood up, but I'm not blameless.

I have a terrible memory for things like events and unless I check my calendar every 30 seconds, I miss a lot of stuff. I don't think I have ever actually skipped a party, but there have been a few times where my notification goes off on my phone that a birthday party is starting in five minutes on the other side of town. I have wheeled into the parking lot on two wheels and thrown a kid out the car door clutching a twenty and a homemade birthday card because I'm the asshole who forgot about a birthday party. I'm guessing birthday mum has had a few close calls too and if she hasn't yet, she will. Just wait, birthday mum.

I'm confused on this one. I know I should be on one side or the other, but I just can't. This is one of those stories where I can see both sides of the story. Sure, it sounds like Alex's mum is a pain in the ass. Alex's mum definitely should have called and said Alex couldn't make it. I think she's full of shit when she said she didn't know how to reach them, etc. The overachieving party thrower probably had two phone numbers and a dedicated email just for this party ([email protected]). I don't think Alex's mum even tried to cancel. However, she didn't deserve to get a bill and to be threatened with a lawsuit. She deserves to have her kid shunned from any future birthdays at the slopes and that's about it. The birthday mum decided to throw a swanky expensive birthday party and was irritated when Alex found something better to do. That shit sucks. No doubt. But she took it too far. Part of throwing a party is knowing that you've got a few dicks on the list who won't show. There are also one or two scatterbrains who, believe it or not, do not have their lives rotating around you and your stupid party and so they'll forget. Today is YOUR kid's biggest day, but for the rest of us, it's just Saturday.

If you liked this post, please share it.  Please sign up via e-mail so you don't miss any new posts. Facebook is now only showing my posts to 5-10% of all the readers who liked my page. You can find me at on twitter at: @throat_punch.

Want to read more? Check out my BOOKS!

Can I also point out that this dive overboard by birthday kid's mom is SO crazy that she's guaranteeing that NO ONE will want to send their kids to any of her precious little snowflake's future birthday parties? Not only does she look like a vindictive psycho now, but people will remember this when the invites roll out next year.

It's a big pile of "if one of you had just decided to be a decent human being and TALKED to the other" it would be over. Both sets of parents here make me feel irate.

I had that happen at my wedding. A bunch of no-shows. But we got a huge doggie bag and ate all the food those suckers didn't show up to eat. So, win-win. British Birthday Party Lady? She's a bloody wanker.

You are one of my favorite authors! I have read both of your books, and I reread them every month or so, for laughs and to just feel better when life gets tough! Please write another book soon! I will buy them all :)

Seriously, though, while it is rude to flake out on an RSVP, I get it. And as a person who lost three grandparents to cancer and whose one living grandparent lives four states away, I think any time a kid chooses to spend with their grands is waaaaaay more important than a birthday party being thrown to show how much better at parenting the birthday boy's mom is.

I can understand being frustrated that you paid for someone who didn't show up. However, that is the chance you take having a party like this. Things happen, and I doubt that if the kid HAD called to cancel, the mother would have gotten a refund. She probably couldn't cancel past 24 hours in advance, if not longer. So if something came up the day of the party, she would have been charged for the missing kid anyway. And, what kind of wuss move is sending an invoice home with the kid? No call from one mother to the other, explaining the situation and ASKING if they would be willing to cover this?

What mom has time for either...sending a nicely typed up invoice OR going over to the others to harass them? Both families suck. Both are off my invite list. No DRAMA allowed. OH, and ps, we LOVE homemade cards...way better than purchased ones. <3

No one seems to think about how the kid may hate going to these things. Of course, it really is all about the Mom and what a great party she is throwing. My son hated these social events but felt pressure to go. Once I told him I didn't care...he never went again!
He thought they were boring and fake and no fun.