The Night My Friend Got Scolded for Feeding a Homeless Man 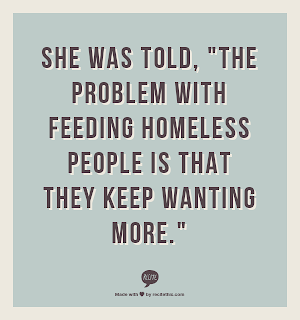 The other night it was pouring down rain, but my friend needed groceries. She left her warm, dry home and ventured out into the cold, wet night to get food for her family. When she arrived at the grocery store, she noticed a homeless man huddled under the awning of the grocery store. He was trying to stay out of the rain, but the wind was blowing and he was still getting wet. She saw a young female employee come out of the store and speak to him and then go back into the store. My friend got out of the car, opened her umbrella, and walked to the entrance of the store. She passed the homeless man who didn't speak to her and she went inside the store. The employee she'd seen before was coming back to the front of the store and she was holding a sandwich in her hands. "Is that for the man outside?" my friend asked.

"Did you buy it or did the store give it to you?"

"I'll buy him some food too," my friend said.

My friend quickly grabbed the groceries she needed for her family as well as a few items for the man in the rain.

When she left the store, he was still huddled under the awning, eating the sandwich.

"Here," my friends said, handing the bag of food to the man. "It's not much, but I hope it will help."

The man finally spoke to her. "Thank you," he said.

My friend looked at the rain pouring down and she knew it would be a long and miserable night. "Take this too," she insisted. She handed the man her umbrella. "You need it more than I do."

The man was stunned, but he didn't argue.

She grabbed her groceries and dashed across the parking lot. She was soaked by the time she reached her car, but she wasn't upset. She knew that she had a hot shower and dry clothes waiting for her at home. She knew she could replace her umbrella.

The next day she ran into a neighbor while she was out. "I heard there was a homeless guy at the grocery store last night," her neighbor said.

"I bought him some food and so did one of the employees."

Instead, the man said, "You need to stop doing that."

My friend was surprised. "Doing what?"

"Buying them food. Giving them stuff. I heard you gave him your umbrella too!"

"The problem with feeding homeless people is that they keep wanting more. You're just encouraging him. Now he'll tell his homeless friends about our town. He'll tell them that the employees at the grocery store give out food and nice women give them umbrellas. They'll all come here. They'll over run our town. We have a nice town. We need to keep it nice. You need to stop feeding them and giving them stuff. Don't do it again!"

My friend couldn't even reply. She was horrified by the response of her neighbor. This was a man she'd lived near for many years. She'd watched him load up his minivan every Sunday to cart his family to church. She'd seen him collect money for charity runs and sell popcorn for the school fundraisers. She couldn't believe what he was saying. She couldn't understand how anyone could see a hungry person outside of a grocery store and NOT buy them a sandwich.

Before she could speak, he stalked off, shaking his head in disgust.

When my friend told me this story I thought. Surely this guy is just a dick. I was actually more concerned about who saw her that night and reported her activities to the neighbor. It really creeped me out that someone was keeping tabs on her and watching her behavior and taking notes. Who does that? What sort of person sits in their car in the middle of rainstorm watching you go about your business and then calls the neighborhood asshole to say, "I just saw Maryanne at the Piggly Wiggly and she bought a ham sandwich and a bottle of water for a homeless man. She's out of control. She needs to be neutralized. Now."

I really just thought that Maryanne's neighbor was a dick and this was a weird isolated incident.

And then I saw this.

It's an article about a ban on "public food sharing." Basically, this ban boils down to: you can't feed a homeless person unless it's carried out by an organization who arranges for portable toilets to be present. So that everyone can be healthy.

Come on. That's bullshit. These people are just trying to help someone and the cities and the communities are cracking down on them by making up ridiculous laws instead of just saying what's on their minds: "We don't want homeless people in our beautiful community. They need to go somewhere else."

Well, maybe if we did a better job of taking care of our homeless population in the first place, they wouldn't be forced to seek shelter from a rainstorm under an awning in front of a grocery store.

We are coming into a season that celebrates generosity and yet there are so many people who refuse to help those in need. They'd rather pass weird laws or scold their neighbors and push the problem further down the road so that they're someone else's problem. It's not a crime to be homeless and many, many, many of us are one catastrophe away from that same fate. I see it all the time. My day job is helping people sell their homes. I can't tell you how many people I've met over the years who were upside down in their homes. It wasn't their fault. The economy tanked, they lost their jobs, home values plummeted, medical bills crushed them. So many things that went wrong were out of their control. They didn't choose for these things to happen, but they did. They were this close to being the guy hanging out in front of the grocery store looking for a little help. They weren't losers or slackers or drug addicts or criminals. They were people who hit a rough patch and needed a hand from their community.

Of course there are always people who will work the system. There is always someone scamming and taking advantage, but I can't let those few people cloud my feelings for the ones who truly need help.

I'm not saying you need to go out on a dark and rainy night and find someone who needs a sandwich. I'm just saying, think twice before you judge someone who is doing that. I know I won't, because I think she's a better person than me.

I myself have given the homeless food and spare change, because I want to help them too, but the unfeeling 'dick' has a point because we are seeing this same thing happen right here in our beautiful town of Bloomington, Indiana. We have some excellent programs for employment, nice shelters, community kitchens and are building some awesome apartments for our homeless folks. Our town is full of generous people and IU students who love to make it a better place than when they found it. And do you know what the fuck is happening? Homeless people from miles and miles around...as far as Chicago (or farther) are coming to Bloomington because of our generosity. The violence in our town is on the rise and the homeless population continues to rise. So while it is an insensitive and asshole point, he has one...and I hate that he does.

mspice3 - He has a point that helping those in need might attract more people in need but he does not get to dictate whether or not his neighbors DO help. In addition, he should reevaluate what his religion has to say about helping those who need it. Just because the homeless and the hungry were invisible (to you) before they moved to your town does not mean they did not exist.

I'm not saying they were 'invisible' or that they don't exist. I'm not too good to help the homeless...I've done my share, trust me. I believe in giving them a hand up, not a hand out per se. It's just unfortunate that in these days with the homeless it is a "if you build it they will come" sort of situation because not every town takes care of their own. I wouldn't live in liberal town if I didn't believe in their politics...look at Indiana, we have a blue state and a little red dot where Bloomington is located, for all of us liberal freaks :) So don't generalize until you've lived it personally.