There is a white lesbian couple who recently had a child with the help from a sperm donation company. They went through the donor profiles and picked Donor No. 380 - a white man. They received sperm from Donor No. 330 - a black man. So now they're suing the company for damages to ensure this never happens again.

The baby has been born. She's a little girl. She's two. She's biracial. Her lesbian mothers are suing because even though they "love" her and wouldn't "change" anything about her, they want damages.

Am I the only person who sees a problem here? 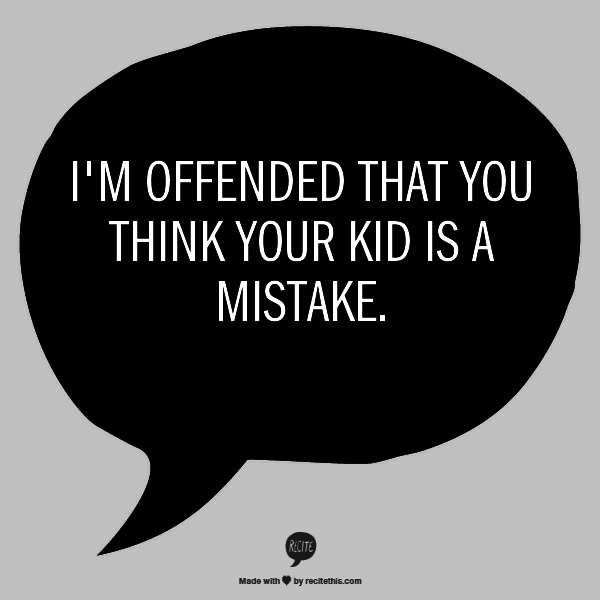 As the mother of biracial children (my children are half Asian half Caucasian) I am offended and insulted that these women see their biracial child as a mistake and something worthy of a lawsuit. They can yell from the rooftops about how much they love their little biracial daughter, but when they chose to bring a lawsuit, I have to call bullshit.

This isn't about a negligent company who made an error. This is about racism. I'm not calling them racists, but I am saying they made this decision based solely on race. What if the mistake had been that they accidentally got Donor No. 388 and he was a white guy? Would there still be a problem? Would there still be a lawsuit? The baby is white. She doesn't have the Ivy League grad sperm they paid for, but at least it's not a black guy's sperm, right?

The little girl, Payton, is only two years old right now, but how will her parents look her in the eye someday and say, "This wasn't about the way you looked. This was about medical malpractice." Can you imagine? We loved you so much, Payton, that we got thousands of dollars when you were born the wrong color. But you're perfect. Don't change.

If this was about negligence, then a letter to the company would have sufficed. Bringing it to the attention of the media would have worked too. If all they wanted to do was to warn other couples that this happens, they could have done that without a lawsuit. This story was sexy enough without the lawsuit: lesbians, sperm donors, and medical mixups. When a daycare feeds the wrong breast milk to a baby, it's front page news. This could have been too.

They could have asked for a refund since this was a business transaction and it was mishandled. But demanding damages says there's something wrong with this child. There's nothing wrong with her. She's biracial. She's not what they expected. That's not a defect. And yet that's how she's being treated. That is the message that is being sent to their daughter and to other biracial kids: You're not worthy. You're a problem. You're a mistake. Their poor daughter.

They're also blaming their town for this lawsuit. When they were pregnant, they moved to a predominantly white, conservative town where they could raise their white child. Now that they've got a biracial kid, they're going to need to move. Hold up. This conservative town was OK with lesbians, but not OK with biracial kids? I'm not buying what they're selling.

No, this would have been the perfect opportunity to hold a press conference and say something like, "There was an error that shouldn't have happened, but it did. We were shocked when we first got the news, but hopefully our experience will help the facility do a better job with checks and balances. However, we wouldn't have our daughter and we wouldn't change a thing." Instead, this lawsuit is saying, "If we could, we would go back and change things. We'd get a white kid."

Maybe I hold them to a higher standard because they're lesbians. I would hope that people facing discrimination most of their lives would have more tolerance and understanding than to label their biracial child as a mistake for the rest of her life.

Jen, I am a regular reader who usually agrees with your posts, but I disagree with this one. The basis for their lawsuit isn't racism: it's that they didn't get what they bargained for in their contract.

As a parent of biracial children yourself, surely you can appreciate that raising biracial children in this country (sadly) still presents unique challenges that raising children who are the same race as the parents does not. These women should not have been forced into this situation involuntarily, through no fault of their own. Now they have been.

I read the original article about this case and I don't see a problem with the lawsuit. The reality is that there is a LOT of bias and racism in the world. They want damages so they can move to a move ethnically diverse area then good for them. My children are bi-racial and we purposely moved to an area that was more diverse. And even then we face prejudice.

This was not their fault and it's not like they are giving the kid up for adoption. I hope they get damages. The bi-racial child of a lesbian couple is going to face challenges in this society. Hopefully a financial settlement will help provide extras for her and her family.

I think this lawsuit is completely justified. You got to pick the father of your children didn't you? And when those children were born, you KNEW what to expect. These women had both of those things taken away from them. If they HAD gotten a different sperm donor, and it WAS a different white guy, and they were STILL going through with the lawsuit...would you have written this post?

They waited two years to bring about this lawsuit. They chose a town that they knew was intolerant to raise their child before what happened occurred. But now they realize they don't fit the mold anymore of what they tried to assimilate into. These two women being a gay couple, they should be very intimate with prejudice in America. Yes, the sperm bank made a mistake and they should be held accountable. But how these two are going about it is wrong. The "hardships" of raising a biracial child. Stop. Seems to me these two are feeling their white privilege has all but left them and they're scared. They've been forced to look into a mirror and are not liking what they see.

And if an infertility clinic mixed up your husband's sperm with someone else's, you'd be totally fine, right? I mean, it's not like you have a RIGHT to decide what DNA your kid is going to have or something! Oh, wait...

Idk.....I kinda agree with Heather and Juniper. I chose the man who fathered my children carefully. The fertility clinic mixup example speaks volumes. More than just an "oops, my bad"

I don't think we need to play the race card on this one. Calling them racists is null in this case. This is so much more than that.

Yes. Exactly. What's love got to do with it? Love isn't part of this equation. So much deeper than that. (Disclaimer. ...I'm a mother of 3 biracial children)

I can see both sides. If I had paid a crap ton of money to a sperm clinic and they implanted me with the incorrect "specimen", I would sue them, regardless of whether my baby was white, black, or purple. What I find odd is their bringing up all the difficulties of having a mixed race child, like doing her hair. It seems like the lawsuit should just focus on a medical mistake that was made.

And kudos, Jen, for pointing out that they were living in an all white conservative town that was cool with lesbians raising babies together as long as they're white?

Thinking of the child in this situation, I say, "Amen." I really don't know how the child is going to handle hearing about this when she gets older. Yes, the company did something wrong, but I think you have to go with what's best for the child and I don't think being in the news for a situation like this is the best thing.

I totally agree. The fact is, the company screwed up. Perhaps they were taken off guard because the little girl was bi-racial, but it should be an issue of malpractice, not racism. Their shock and the stress associated with the surprise should be acknowledged, but now they need to build a loving environment for the daughter they DO have, rather than fretting over how to do her hair in front of the entire internet.

So we don't have enough homeless or hungry children in this world already? This shitty couple can't reproduce naturally because they're "doing it wrong" and now these misfits are bitching about the baby person they ended up with? Nice.

S, what they bargained for in their contract was a white baby. They got a bi-racial baby. I definitely believe that the basis of the lawsuit is about racism.

It boils down to this: they ordered number 380 and got number 330. In any other business transaction, which is what this is, nobody would have a problem with the lawsuit. Also, maybe the lawsuit will make that sperm donation company tighten up their processes to make sure this sort of thing never happens again.

Don't diminish the real problem of racism by making a brouhaha over what was clearly an inexcusable mistake by the sperm donation company. They can love their child and still be outraged by their monumental error.

Thank you for voicing exactly what I was feeling. The town is so conservative that it rejects their bi-racial child but accepts a lesbian couple? It does not make sense. Also, the hair care argument is nonsense.

This story just makes me sad. I don't agree that the couple shouldn't pursue a lawsuit to protect the daughter's later feelings though. Saying that an error was made in the conception doesn't have to translate to not loving your child.
I have a very good friend who is a child of rape. Although it hasn't always been easy she is very sure that her mother loves her and her mother has always been very demonstrative about her daughter being the most important thing in the world to her. However that doesn't mean that her conception wasn't a crime and horrible. She was able to say what happened to me was wrong but that doesn't mean that I don't have an incredible blessing in my child.
If handled correctly there's no reason that these parents couldn't convey the same message to their child one day.

I am totally with you about thinking lesbians should understand bias and be more tolerant. I have a lesbian aunt who is horribly racist and I am always more offended by her racism than I am by my grandmother's. I mean sheesh, really Aunty? Can't see any parallels?

I totally agree! I have a huge issue with the negative message that they are sending their daughter. One day, she will grow up and read about this. How could they not think about that?!