A lovely man named Tom Junod wrote an article for Esquire magazine where he sang the praises of 42-year-old women. I'm not sure how young Tom is, but I'm imagining him as a strapping 19-year-old with a full head of hair, tight abs, and sparkly green eyes. Because according to him 42 is the most alluring and sexy age. That's right. He thinks 42-year-old ladies are MILFs. A lot of his reasoning has to do with feminism and life experience and a good sense of humor. I think. I had a hard time following the article, because all I could focus on was the fact that for once in my life I'm HAWT.

That's right, people. I am the hottest age evah. Suck it, forty-year-olds.


It's so strange, because if you would have asked me when my hottest age was I would have said ... well ... hmmm ... hold on, let me think about this one for a minute. OK, I think I was kind of cute when I was 23 when I posed for probably the best picture I've ever taken. It was awesome. I kept that driver's license even after it expired because who knew when I'd look that good again? Or when I was 16 and I thought I was fat, but man, I'd kill for that body again. Shoot, this is a tough question. Oh I know!! I looked really good on my wedding day. I mean, really good. For a thirty-year-old. I had my hair professionally tamed and my make up covered my crow's feet and champagne is totally my color.

Apparently, all of those times were nothing compared to how I look today. Today I am a fierce and sexy 42-year-old woman. Rawr!

The author mentioned women like Sofia Vergara and Cameron Diaz as perfect examples of sexy 42-year-old women. I am just like them! I mean, I'm sure that if you saw Sofia without her makeup and her Spanx and five-inch heels she'd look just like me. She'd be a short, fluffy, mousy, well-endowed woman pushing a cart with a wonky wheel through the aisles of Target looking for a heavy duty concealer and IcyHot patches. Twinsies! 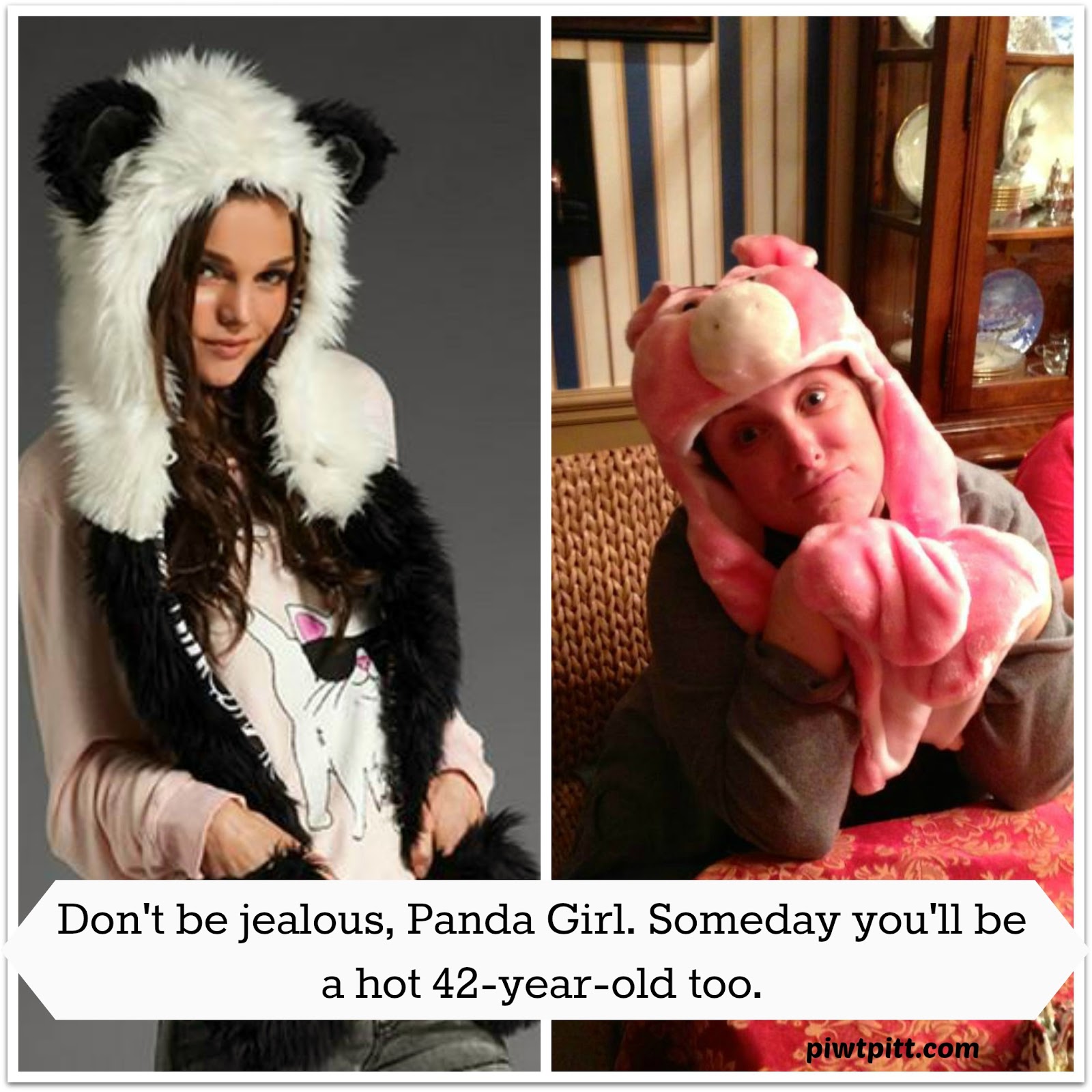 Today, Tom's theory was totally confirmed! I took my children to the dollar movie. I pulled up in minivan and I parked next to a fancy little car. When I got out of my van, I noticed the two young men in the fancy little car eyeing me. They were watching me closely. I could feel their dirty little eyes watching how my cargo pants hugged my curves as I bent over to get my giant bag of movie treat contraband out of the passenger seat. And then I heard the young man behind the wheel say, "Watch her, dude." Now, he might have gone on to say, "If her bag scratches my car I'm going to slash the tires on her stupid swagger wagon" but I stopped listening after he encouraged his friend to not take his eyes off of me. Oh my!

Wait! There's more! Then we headed into the already dark theater and as I was going in the door, another young man was coming out. He stopped short when he was met with my dazzling 42-year-old hotness -- and the bright lights from the lobby. He had a dazed expression on his face (methinks he might have been a little in loooove) and he said, "Oh, excuse me ma'am. Did you need some help? Let me get the door for you." I flashed my wedding ring at him so he would know: Back off! I am taken, sir! Of course he continued to hold the door for the (sexy) sexagenarian behind me and called her ma'am too and the dude who was checking me out in the parking lot. OK, maybe he worked at the theater and his job was to hold the door. Doesn't matter, because I could feel him practically undressing me with his eyes! I could feel him thinking, "I wish this movie theater was empty so we could watch The Lego Movie together in the back row and share Twizzlers like Lady and the Tramp shared spaghetti."

I must say, if I had not read this Esquire article, I would have been completely unaware of all the young men out there who are now finding me too hot to handle.

Sure, there are a lot of women out there who are up in arms about Tom's article and feel like lines like "It is feminism that has made 42-year-old women desirable" are demeaning and detrimental to the feminist cause. I get why they're upset. It sort of sucks that he's saying equality makes me doable. I should probably agree with my feminist sisters and demand Tom's head on a pike. But you guys!! He said we are doable!

Let's face it, I'm a 42-year-old lady with a boy's haircut and Crocs. It's not every day that I'm called hot! (And especially in writing.) You womyn can be upset all you want, but I'm going to go ahead and let this one slide. The line forms to the left, fellas!

OMG this is hilarious! You crack me up. There must be something with hitting this age that makes you not really give a damn anymore about what people think. I know from my standpoint I am so busy with my career, mowing the lawn, fixing the plumbing, cleaning bugs out of my basement, etc. that I don't have time, nor do I care anymore, about looking good just to run down to Home Depot to get mulch and weed killer on a Saturday afternoon!!!! So away I go in a dirty shirt that probably doesn't even match the dirty shorts I am wearing, along with any old pair of flip flops I can manage to find as I am heading out the door!!!! Ah, the joy's of being a 40 something woman!!! But I will say I clean up well! :)

I turn 42 this year and I'll take it! I'm sure some people may take offense to the article and on a different day, I might have too, but every once in awhile it's nice to just say "damned right!" and move on with your day. Great article as always!

dangnabit!
So I guess I missed my year to be hawt.
If only I had known this Last Year when that strapping young man with the scruffy beard gave me the eye in the grocery store.

How does he feel about 79 year olds?

He was probably referring to hot flashes.

What the heck? I'm hot? I had no idea. I had an idea that I might be getting better looking, but I didn't know other people were seeing it too.

If I'm this hot at 42, how freakin' hot will I be at 62? Can't wait to tell my teenage sons how hot I am now. Kids love hearing that stuff about their moms.

Ah darn! I have 2 more years before I reach my maximum hawtness! (Gotta make sure I remember to see who all is checking me out at that magical age!). Thanks for making me laugh this morning. :)

Icy Hot? Surely you jest. Mineral Ice is the only way to go. I'm a wee 39 years of age and even I know not to leave the house without Mineral Ice!

Well, shit-- I'm 45. You mean I've been fuckable (with lights off) for 3 whole years and didn't know it?! WooHoo! Tom, you just cured my vaginal dryness with your sweet words. Get over here and rip this Coldwater Creek blouse off of me!

Some of the most attractive people I've come across are in their 40s - I definitely think that guy's theory holds water :)

So THAT'S why all the young fellas look at me. I thought it was because my yoga pants were cameltoeing again.

HILARIOUS! So wait. If I'm almost 47, does that make me five years HOTTER? So I'm like on FIRE!!!! So THAT'S why the cashier bagged my groceries with that teenage blemished blush and that sparkly medal smile!! *Shivers*

I will be careful not to wear my hair down and out of my scrunchy, because I really don't want to lead the men on.

Keeping my eyes out for all those lookers now. Thanks for the heads up! ;) Rawr!

Did you see that Tom's pic is at the bottom of the page??