I Hang Out With My Boys Gary, Carl, and Jimmy 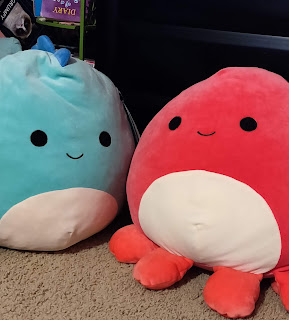 Today is take your kid to work day so me and Gomer are working for our mom. So far the life of a writer isn't so bad. I've gotten to update her Insta and take pictures of my stuffed animals and write about them. So go like those pictures!


Now I'm going to talk about some other stuffed animals. So I have these stuffed animals called Squishmallows and I name them sad middle-aged man names (sorry if you have any of these names).

So the first ones name is Carl. I named him Carl because my friend got me him for my birthday one year and I didn't know what to name him. So my friend suggested Carl and I did.

The next year for me and my brother's birthday I got him a Squishmallow because he loved Carl, so I got him a dog one and he also went along with the sad middle-aged man names and named him Gerald.

Then I got all of my friends some tiny ones. And my friend who gave me Carl got a raccoon and named him Rocky and my other friend got a llama and named him Larry.

My favorite from that set was Danny the Dino. Hes a tiny green dino about the size of a baseball. I also got a unicorn and named him Brad and a panda and named him Stan not just because the middle-aged man named but because his full name is "Stan the Pan".

I got a lot of other tiny, tiny Squishmallows but I won't go through all of them. But I got another big dog but he doesn't look like Gerald and Billy. And I named him Albert. Albert's chill. Then I got a dinosaur that looks like Danny but bigger the size of Carl and all the other big ones but he's not green he's teal. And I named him Benny. Then for this Easter I got a squid. And named him Jimmy (All of my stuffed animals don't really have genders). Jimmy I found a few months earlier when we got back from our vacation in February. I saw him sticking out of a suitcase and noticed his color was pink like Carl's but brighter. I asked my mom why she had a Squishmallow that looks like Carl. And she said she didn't know what I was talking about. Later that day I went to visit him and he was gone. So I forgot about it.

Maybe a week later we went to Costco and I saw the same color Squishamallow. And I wanted to buy him but my mom wouldn't let me. But she would let me buy a sloth or a chick, the only other two in there. I wasn't a fan of the chick so I only bought the sloth and named him Johnny. Johnny lives on my bottom bunk with Benny and Danny. All the other ones are in bins or on a different bed or in the womb (the womb is a tent I bought and filled with stuffed animals, blankets, and pillows and my mom said it was like a womb, but now it's more of a bear cave because that's where my bear lives and Gomer's bear used to live).

So when I got Jimmy for Easter my mom and brother explained how they hid him in Gomer's closet because I never go in there. And Gomer says how he hugged Jimmy before he had to give him away to me. And also played and hugged with him more than that I was kind of mad about that. But I like Jimmy he's kewl. So that's all of my Squishmallows.

Maybe I will talk about my other stuffed animals on another day. Maybe the next take your kid to work day if you all can get mom to say yes. What do you think?

My mom won't let me have a dog, but she will let me have a DOG INSTAGRAM where I take pictures of my Grandma's dog, Lexi (and sometimes other dogs too). You can follow me.

Also my mom writes books about me and Gomer. She says if she sells some books today we can get some lunch.

"Albert's chill" LOLOL
I love all of this! My 12yo is also into naming her stuffed animals. You two could write your own book together about your comunities of stuffed creatures.
Great job!

I love that you have a sloth!!! That is so cool! My daughter has a lot of stuffed animals but not a sloth. Must. Get.

Your Squishmallows sound awesome! I applaud your choice of names - way better than Fluffy or Princess - and Stan the Pan is definitely my favorite. Have you ever loaded up your bear cave with all your Squishmallows and chilled with them for a nap? They seem like they’d be the best nap buds.

This is fantastic. Fun read that brightened up my day!

Oh, Jimmy sounds huggable - especially if an older brother hugged him! I love your story! They sound like characters in a book! Do you write for fun??

Super cute! I never knew I loved sloths till recently...so great choice over the chick.

So mom...First, these kids have inherited your incredible sense of humor and like mine they love to turn it back on you, am I right? And secondly, the squishmallows took me back, to talking to my now 21yr old daughter and I kept nodding my head - uh huh, really? Wow, uh huh. So I laughed out loud and called her to say " I sure do miss your rambles, my beautiful daughter!" So thanks for that...both of you!