Help. My Kids Are Trying to Kill Me. 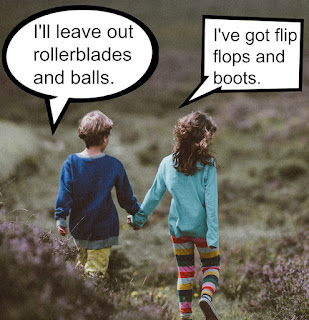 Yesterday my children tried to kill me. I know this because I watch a lot of true crime TV and there was a very similar case a few years ago. There was a husband who was trying to kill his wife, but make it look like an accident. For instance, they would go upstairs to kiss the kids goodnight and the stairs would be well-lit and empty and then he'd go down first. When she'd come down a few minutes later, the lights were off and the treads were littered with Matchbox cars because he was hoping she'd slip and fall to her death! Or once he called her down to the basement to show her something and when she got down there he said he couldn't remember what he wanted. So they laughed and headed back upstairs. He insisted she lead. He was following so quickly and closely on her heels it caused her to lose her footing. She reached for the banister but it was GONE! Luckily she fell forward instead of backward into the pair of scissors her husband was holding in a casual, but totally murdery way!

I should have suspected something was afoot when my kids offered to wash my car. Yesterday was a balmy 50 degrees and they were both running around in shorts and tank tops complaining of being hot. They said they needed to cool off and an easy way to do that would be to wash my car. Now, my car was a pit. I don't think it's been washed since November. After school on Friday Adolpha was reluctant to jump into at pick up, because she couldn't see the license plate and she wasn't sure if it was really my car. I don't turn down free labor, so even though my Spidey Senses were tingling, I agreed to a wash.

"Okay," I sighed. I was really hoping to get some uninterrupted writing time while they played outside and suddenly this free car wash was costing me precious time.

After I moved the car, I was walking back through the garage to the house. Normally my garage is a shithole, as our president would say. It is a literal dumping ground for everything. On a normal day, navigating the garage is like weaving through a minefield. But on the first warm(ish) day in months, it was even worse than ever. Rollerblades, bicycles, helmets, baseball bats, basketballs, and more had all been pulled out, played with for thirty seconds, and then discarded to litter my path. Now, a normal, non-lazy person would probably bend over and move some of these items out of her way, but my kids know who they're dealing with. They knew I'd never move anything, not even kick something out of my way. So, when I stepped over a football I didn't realize there wasn't a clear landing zone until it was too late. My foot caught a well-placed flip flop and because I am graceful as fuck I went down like a ton of bricks. I flailed my arms and tried to grab anything to stop myself, but to no avail. Instead of flailing, I should have put my hands out to break my fall. If I'd done that, maybe I could have grabbed the railing on the staircase into the house. Instead my head took the full impact. We keep folding tables closed up and stacked up, leaning against the wall near the staircase, so for good measure, I pulled a heavy folding table over on myself as well as I went down.

I remained on the floor for quite some time, stunned and swearing profusely and thanking the Lord I had enough stuffing to protect my weak, old lady bones from breaking. The kids heard me fall (or maybe they were lurking close by watching) and came running.

There was a lot of (fake) concern where they asked me if I needed ice packs or an ambulance, because we all know they were just hoping I'd concussed myself enough to offer ice cream for dinner. "Mom! Mom!" Gomer said. "What do you need?"

I lay there whimpering in pain and finally I whispered through gritted teeth, "I just need you to clean up your shit!"

Today I am sore and I have a lump on my head from the railing and a large bruise on my rib cage from the table and last night I was Googling "how to tell if your ribs are broken." My car looks terrible, because my brainiac kids couldn't get the hose attached to the water spout, so they "rinsed" my car with water guns. My garage is still a shithole.

Maybe they didn't try to kill me, but just in case, I did let them have ice cream after dinner last night.


I am heading out on Tour this week! Come and see me! Get all the dates and details here!