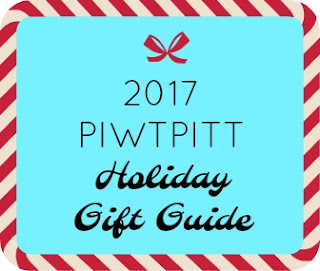 Well, it's that time of year again. If you're anything like me, you shop all year long for Christmas so that way you don't blow the bank every December. But if you're also like me, you'll lose the presents you've already bought, so that means it's time to start scrambling around the house and checking all your hiding places. While you're at it, you might as well look for that damn Elf too. It's time to dust him off and put him on the shelf.

This year I didn't buy much in advance since my kids are getting older and their wants change faster than I can keep up. Also, the number one thing they ask for now is: CASH. Cash isn't fun to wrap! I know, I don't usually enjoy wrapping presents, but this year I found some sweary wrapping paper that made me wish I had something to wrap. I also found some fun prank boxes that will be fun to put under the tree this year. I can't wait to see the look on Gomer's face when he gets an Ear Wax Candle Kit. 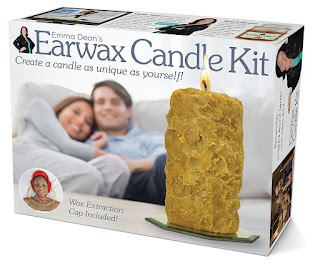 My mother would NEVER use the sweary wrapping paper or a gag box of money, so I told the kids that if they wanted anything from Grandma and Grandpa they'd better make a wishlist. This is what they came up with: 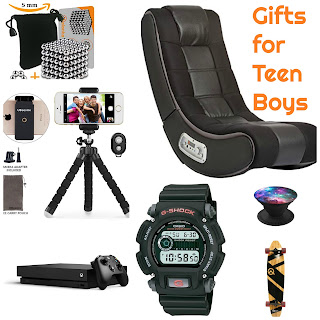 Magnetic balls - Gomer is a fidgeter. He's got all the spinners and clickers in the world, but he also finds magnets relaxing. He likes to make little sculptures and buildings with his magnet sets. He has several sets, but he always wants more.

Tripod for phone - Gomer is now officially a teenager with social media and all that jazz. He enjoys making videos and taking selfies and whatnot, so a tripod would come in very handy.

Xbox One X - "Don't we already have this?" was my question when I saw this on the list. Nope. Apparently this is the NEW one and now all our games are obsolete and we'll be the laughing stock of the world if we don't get this one or something to that effect. Even the Hubs was like, "Yeah, we probably need that." I can't say much since Adolpha and I probably spend this much on books and pens.

G-Shock watch - I added this to the list, because even though Gomer carries a phone everywhere he goes he still never seems to know the time and is always late. Plus he goes to camp in the summer where he can't have a phone and I think a watch would be helpful. It's weird that people don't wear watches anymore, right?

Gaming rocking chair - Supposedly this will make him a better gamer.

PopSocket - This makes taking selfies easier or something?

Longboard skateboard - I think a skateboard has been on Gomer's wishlist since he was 8. The boy loves skateboarding. He has a bunch, but he doesn't have a LONGBOARD. "There's a difference, Mom." I really don't care, I just know it gets him out of that gaming rocker, so I'm happy. 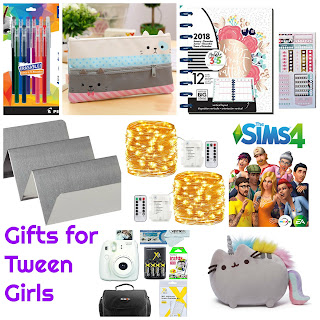 PILOT Frixion Erasable Pens - Because she can never have too many pens. Also, they're erasable!! What???

Cat zip pouch - She needs a cute pouch to hold all her ah-may-zing pens.

Happy Planner - Adolpha is organized. I can't believe she's my kid. She loves this brand in particular. She enjoys putting everything in her planner and this one has cute stickers and tabs that makes it really fun. You can buy refills for it too.

Taco holder - Adolpha wishes every day was Taco Tuesday. The problem is tacos are messy, Adolpha is not.

Fairy lights - A girl can not have too many fairy lights. She strings these everywhere! I must admit, if fairy lights existed when I was a girl, I would have been equally obsessed. They're really fun. I even want some for my office now.

Sims 4 - Gomer's games involve a lot of shooting, but Adolpha's all about the world building and nurturing. She plays a game where she has a job and every night she's like, "Well, I gotta go to my job at the pizza parlor. See you later." What the heck??!! She's super excited for this game. It really should be at the top of her list.

Fuji Instax Mini 9 Instant Camera - I think this is the second year on the list for this one. I'm all about the digital, because I can remember the days of paying for crappy photos. Remember how we had to pay for the film and then to develop the film and half the pictures were blurry or someone's eyes were shut or whatever? Well, Adolpha longs for those days.

Pusheen - Pretty much any Pusheen will do, but the Rainbow Caticorn is the one she NEEEEEEEEDS. 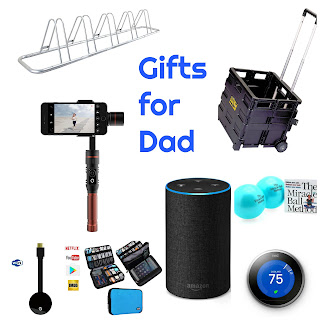 Bike Rack - This thing is amazeballs. I bought one over the summer because every time I went in the garage I got mad when I saw hundreds of dollars worth of bikes laying on the ground out there. My car was getting messed up from bikes falling over and hitting it, etc. So I bought this thing. It's fantastic. We really need another one now for scooters and skateboards, so I'm going to get the Hubs one because if moms have to get blenders and shit for Christmas, dads have to get garage junk.

Wheelie Crate - I think this is really for tools, but I use it for books and groceries and anything else heavy that I don't want to carry. It folds flat and it can hold 70 pounds of stuff. I keep it in the trunk of my car. The Hubs keeps borrowing it and he never returns it, so I'm getting him his own for his car.

Stabilizing Selfie Stick - The Hubs likes to take family selfies when we travel, so I bought him a selfie stick a few years ago. Now he needs this fancy one, because it has some sort gyro-thingy that stabilizes the stick and it's like having a steady cam. As long as it makes me look 10 years younger and 15 pounds lighter, I'm in.

Miracle Balls - Last year a reader recommended these little balls to me to help alleviate back pain. I had tried all sorts of things and so I was a bit skeptical, but they were cheap and I decided to take a chance. OHEMGEEE!! These balls are magic. I don't like sharing, though, so the Hubs is getting his own set.

Chromecast - We need a new one and since the Hubs is the gadget guy, this goes on his list.

Tech organizer - I've been traveling a lot this year for my book tour and I've found all sorts of fun travel products to help keep me organized. I have a Grid-It I like a lot, but I also love this little case. The Hubs carries his cords and plugs and earbuds and stuff in a Ziploc bag. The dude needs an upgrade.

Amazon Echo - This surprised me when he put it on the list. Normally he thinks this kind of stuff is silly. But it seems like he's coming around. I think it's because he wants The Nest and The Nest can be controlled with the Echo.

The Nest - This device is perfect for the Hubs. He will be master of the thermostat AND it's a gadget. 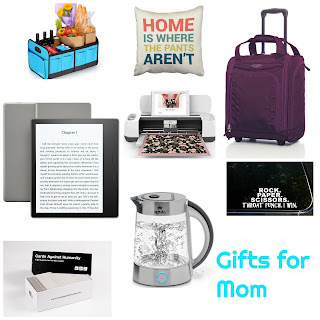 Trunk organizer - I'm trying to be a better organized person, but I feel like my mobile command center is always a mess. I don't like it when my bananas get squished by a watermelon on the way home from the grocery store. I don't like it when baseballs and basketballs are rattling around in my trunk. I bought a couple of these organizers for the backseat and they've been amazing at controlling the clutter, so I'm hoping the trunk one would do the same.

Snarky pillow - If you follow me on Facebook, then you know I'm a big fan of the no pants movement, so I'd love to have this pillow on my couch.

Under the seat rollerbag - As I mentioned I've been traveling a lot and 2018 is looking to be another big year for me. I'm hauling hundreds of books everywhere I'm going and I've messed up my arm and shoulder from manhandling giant bags through the airport. I'd love to have a compact roller bag that can haul a lot and fit under my seat. This one seems perfect.

Cricut - My craft room has been neglected over the last few years, and I'm anxious to get back in there. I have an older generation Cricut that I like a lot, but this one seems magical and awesome and I feel like I could do some ah-may-zing DIY with this bad boy. It's sort of like how the boys feel about the new Xbox. I get it now.

Kindle Oasis - OK, I'm a HUUUUUUGE fan of the Kindle Paperwhite and normally I'm like, "Get the Paperwhite, it's the best" but this one is WATERPROOF. Do you know what that means? I can get in a bubble bath and have no fear of wrecking my Kindle. I can float in the pool and still read. This is a game changer, people. Yes, yes, it's pricey, that's why I'm going to ask Santa for this one.

Throat Punch vinyl decal - I didn't make this, but I want it BAAAAD. I want to put it on my (newly organized) swagger wagon and drive around town making everyone nervous.

Cards Against Humanity - I think I'm the only person in the world who doesn't own this game. I want it, but I also want it to come with a fun group of people to play with.

Electric tea kettle - I love me some tea. I drink it all day every day (when I'm not drinking Trader Joe's Chai). I normally use my Keurig, but I feel like it doesn't get hot enough. I'd like to go back to a tea kettle and growing up we always had an electric one. It's sort of what I know and I want to go back to that.

In addition to all of this, I want to get another year of Prime. Last year I finally pulled the trigger and subscribed to Prime. I'm not sure what took me so long. Part of it was the monthly fee. I felt like I wasn't sure I'd get my money's worth. I was wrong. Just in shipping alone, we save that much every month. Plus we watch movies and TV on Prime and I read books and magazines that are exclusive to Prime members. I think it's one of those things that you don't think you'll use it, but then once you have it, you're like, "How did I do anything before this?" I tried the free 30-day trial and then I was hooked after that and now you'll have to pry my one-click button from my cold, dead hand.

I can't make a gift guide without some books! Here are a few I read and recommend: 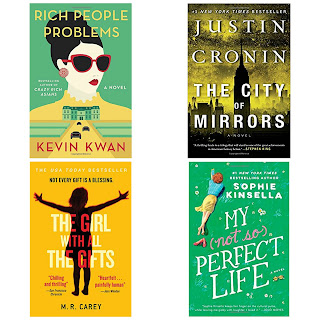 I love me some historical fiction: 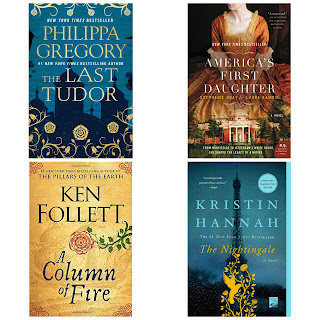 Nonfiction is my jam: 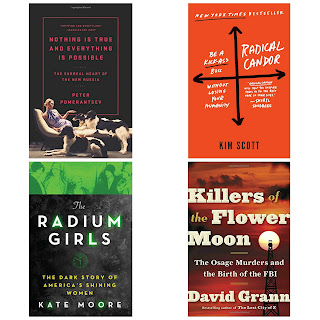 These kept me up past my bedtime: 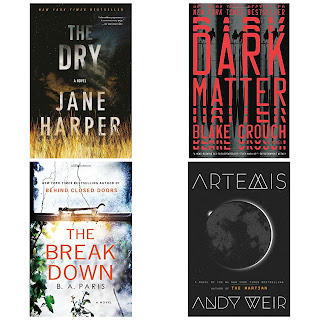 The Breakdown
The Dry
Dark Matter
Artemis (Haven't read it yet, but really looking forward to it.)

Adults can read YA too: 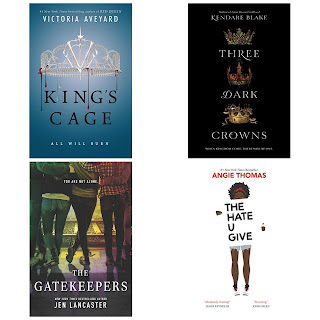 The Hate U Give
The Gatekeepers
Three Dark Crowns
King's Cage

When I'm not reading, I'm writing: 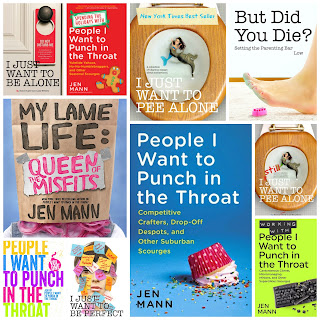 And, of course, ANY of my books make great gifts too!! Get them all here. BLACK FRIDAY SPECIAL: MY LAME LIFE IS ONLY 99 CENTS ON KINDLE.

FYI, many of the links are affiliate links and I'll make some pennies if you buy from them. I have to pay for my book habit somehow.