How Best to Control Your Kids

Guest post from the Hubs AKA "The Law" about his "Forceful" parenting style.

Lots of parents wonder why my kids are so well behaved and get 100's on their spelling tests.  Well, I thought I share my secrets to raising great kids.  I have seen those other asshat parents all over the media about how to control their kids.  Tiger mom, Wolf dad and the new entry Pistol Packing Papa. They go to such extremes to control their kids.  In reality, it is not so hard to control them and get them to do what you want.

Two simple words: Bribery and Blackmail.  Yes, I did say bribery and blackmail.  Let me explain myself before everyone tells me I am a bad dad and that my children are having a terrible childhood.

A Mother's Work is Never Done 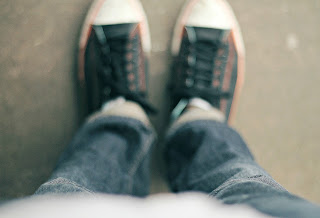 When my children were little I can remember feeling like I was drowning. I had two in diapers and no one napping at the same time and not even one second to pee alone. I felt like I could never leave the house without leaving behind my cell number, the phone number of the restaurant where I'd be, the phone number of the three women I'd be meeting for dinner (“It gets loud in the restaurant, Jen. Sometimes you can't hear your phone. It might be important. Suzie's always got her phone on vibrate. Guess she likes to be more in touch with the family...”), the phone number for poison control and the pediatrician, enough bite-size, toddler-friendly snacks for a week (“Just in case, Jen.” Even though no one should be eating since I fed them dinner before I ever left!), clean sheets, blankets, and jammies (for potential inevitable blowouts), and five pages of instructions (Adolpha can only go to bed after she's kissed every stuffed animal goodnight, drank 17 glasses of water, has the closet door firmly shut, and is essentially trapped under 82 blankets. Gomer can only go to bed after he's thrown everything out of his bed so he can create a “sleeping nest” of 81 blankets, his radio is tuned to the soothing sounds of NPR, and you've read Go Dog Go 12 times [with appropriate dog-sounding voices].)

When the kids were little I would eye my friends with older children with longing and desire. One friend noticed my creepy looks and warned me, “Be careful what you wish for, Jen.”

I shrugged, because it didn't look so bad from where I was sitting (which was the floor of my pantry where I could hide and scarf Halloween candy without little grubby mitts pawing at me for a gummy bite).

My wise friend then informed me that raising older kids was actually more hands-on than I thought. “Just you wait,” she warned.

I didn't know what she was talking about until last year. Last year I released Working with People IWant to Punch in the Throat and I embarked on a multi-city book tour across the country. I had never done anything like that before, but I figured I could sneak away and no one would notice. That first leg of my tour, I flew off without a care in the world. I told my husband the name of my hotel and that was all the info I left behind. What more did they need? I figured. My kids were 11 and 13. Everyone wiped their own butts and could work the toaster oven. They didn't require five pages of instruction anymore. Just Hot Pockets and a valid insurance card.

Sure, my kids said they missed me and they even called me occasionally, but I couldn't find any evidence that they actually missed me or needed me while I was gone. They figured out quickly once they ran out of clean underwear and cereal bowls there were some issues with making sure someone was doing laundry and dishes on a regular basis, but otherwise it was smooth sailing.

Or so I thought. I was home in between stops when I got a call one afternoon from Gomer's assistant principal.

“I've got Gomer here in my office. He was in a fight,” she said.

A fight? Gomer? No, she must have the wrong child. Gomer is my easy-going child. Adolpha will throw down over anything, but not Gomer. I figured someone must have hit him. It was the only logical answer.

“He's fine,” she said, emphasizing the he. “He attacked another student.”

“What?!” I couldn't believe it. Did she really have the right kid? There was no way Gomer would ever attack anyone. I was positive. I'm a good mother. I've raised a well-behaved and kind young man.

“Is everything okay at home?” she asked.

“What?!” Did I mention that I'm a good mother? That I've raised a well-behaved and kind young man?? Of course everything is okay at home. I mean, sure, I've been on the road a lot this year and he hasn't had two parents nagging him to pick up his dirty clothes. And, sure, when I'm in town, I'm a bit distracted, because I'm finalizing plans for my upcoming trips. And, sure, I've been dealing with some health things this year and so I'm more tired lately. But, still! My child would never--

“He did a pretty serious thing,” she said.

“What did he do?” I asked, sinking into my chair.

Okay, I know your first inclination is to laugh. I had to stifle a giggle myself, because REALLY? That's his move? He's the son of People I Want to Punch in the Throat!

“Did you hear me, Jen? He pulled down another student's pants. This is very serious. This could be seen as sexual assault.”

I sat up straighter and wiped that smirk off my face and got down to some real parenting. I figured out what prompted my son to do such a thing. Apparently there's a boy at school that isn't very kind. We'll call him Irving. And let's say what we mean: Irving is a bully. He's been picking on several students throughout the year. On that particular day Gomer had finally had enough. In the past he'd tattled to the teachers, he'd told Irving to go to hell, he'd told the bullied kids to ignore Irving, but nothing changed. Gomer was tired of watching his friends get picked on and so he thought through his options. He knew telling Irving to fuck off wouldn't work. Gomer knew if he actually punched Irving in the throat or anywhere else he'd physically hurt Irving and he'd be suspended. He wanted to make Irving feel as small and as insignificant as he made others feel. Gomer needed to mortify Irving. So, Gomer waited until the perfect opportunity and then he pulled down Irving's shorts in front of their class. (He left the undies in place. Because he didn't want to go THAT far.)

I was shocked for several reasons:
I felt terrible. I felt terrible that my son had put his hands on another child. I also felt terrible that my son felt that was his only option. When I asked him why he didn't talk to us he never said, “You're always gone.” Thank God for that, because no one ever tells a traveling father that, but it still bugged me. It was in the back of my mind. That maybe, somehow, I'd caused this with my absence. But what could I do? I can't stop traveling. That's a big part of my job now. I travel all over the country to speak and promote my books and if my kids want new shoes, I need to keep going. But something had to change.

After that phone call I resolved to do a better job parenting on the road:


I've been working with Responsibility.org for several years now and I'm always learning about how to have tough conversations with my kids and I felt like I was prepared for just about anything. I think that's why this shocked me. I thought I knew my kids and I thought I'd taught them our values and our expectations. But I've been slacking. It's time to start talking again. I realized that I can't stop talking. When they were little, they wanted to talk to me. They wanted to be taught. Now I have to force myself into their lives and it's hard work and I got lazy. In the whole scheme of things, Gomer's disagreement with Irving wasn't a huge deal, but huge deals start when the little deals slip through the cracks. It was a wake up call to me and now I know that I can't be so complacent. He's in seventh grade. I've only got a few more years until he's on his own and making his own choices without us. I need to do a better job preparing him.

I have no idea if my parenting—or lack thereof—from the road caused this event, but I do know that the changes I've decided to make can't hurt.

PS - Normally Gomer doesn't like me blogging about him. He's a private kid. But he did give me permission to tell this story.

Get all my book here.

How About a "Thank You"?

Lately I've been kind of busy with a bunch of other stuff so I haven't been paying close attention to what's going on in the world. However, over the weekend and into today I've received countless links to articles about that letter from the asshole parents who are throwing their snowflake a first birthday party. I finally had to stop what I was doing and take a look! 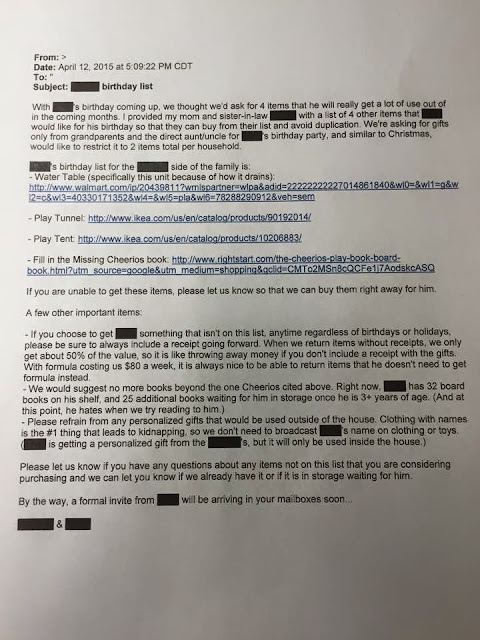 It's been a long weekend.  I put the kids to bed tonight and I looked around my disaster of a house, but I didn't see my mess.  (I never see my own mess - just the messes the Hubs and kids make.)  But tonight I only saw the mess the Girl made.  A shitload of little bags the Girl packed with random crap.

What is the deal with this?  Am I the only one living with a tiny bag lady/boy?


I knew she had a lot of bags packed around the house, but it wasn't until I decided to get them all in one place that I started to wonder if she might have a problem.  I started making the rounds through the house and here's what I found: 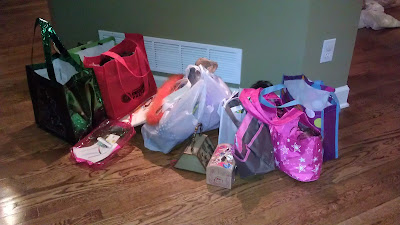 PIWTPITT's How To Be a Good Wife

Email ThisBlogThis!Share to TwitterShare to FacebookShare to Pinterest
Labels: advice for wives, be good to your man, how to be a good wife, pickles, throat punch
Newer Posts Older Posts Home
Subscribe to: Posts (Atom)